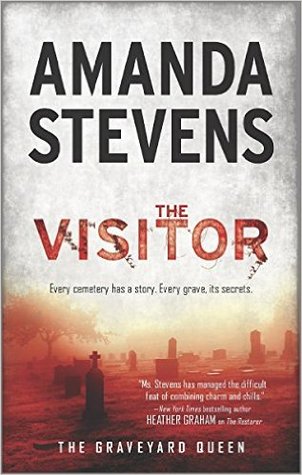 www.AmandaStevens.com
My name is Amelia Gray. I'm the Graveyard Queen.
Restoring lost and abandoned cemeteries is my profession, but I'm starting to believe that my true calling is deciphering the riddles of the dead. Legend has it that Kroll Cemetery is a puzzle no one has ever been able to solve. For over half a century, the answer has remained hidden within the strange headstone inscriptions and intricate engravings. Because uncovering the mystery of that tiny, remote graveyard may come at a terrible price.
Years after their mass death, Ezra Kroll's disciples lie unquiet, their tormented souls trapped within the walls of Kroll Cemetery, waiting to be released by someone strong and clever enough to solve the puzzle. For whatever reason, I'm being summoned to that graveyard by both the living and the dead. Every lead I follow, every clue I unravel brings me closer to an unlikely killer and to a destiny that will threaten my sanity and a future with my love, John Devlin.

The Visitor picked up shortly after the events in The Prophet, so if you are interested in giving this series a shot, I strongly suggest starting at the beginning, as a lot had happened. Ever since Amelia took Gray dust and came back, she bought something with her from the other side, a woman who happens to look like her except for the fact that she is blind and very much dead. Now the mysterious visitor is haunting Amelia and want something from her. The Visitor mentions a key that will help Amelia find her salvation, but when a stereoscope shows up in the basement of her house, someone else is trying to get Amelia’s attention. Every sign points her to Kroll Cemetery and it’s starting to look like the original ghosts wants her to find the real reason behind the mass suicide that cause all the people to die.

This was one of my favorite books in the series. We see a lot of character growth from Amelia and we get to dig deeper into her past and where she had come from as well as her father’s background. I thought the story was sad and compelling, Stevens did a terrific job.

This book felt just as creepy as the second book in the series, and it was hard to read at night with the lights off. Now that the rules that Amelia’s father tried to pass on to her no longer work, we get to learn more about what Amelia is as Steven slowly peels away the layers of secrets. Devlin’s family is also filled with secrets that I am eager to uncover as the book goes on and it sounds like it will play a major role between Amelia and John in the future books. Especially since John himself is undergoing certain changes possibly due to the incident in the last book.

The only a few things I felt upset about is the fact that Amelia’s father continues to be a shutout. He seems to now know what his daughter is going through and that the rules no longer protect her, but he is still holding on to many secrets from her. I feel like maybe she should know these things by now as far as her safety is concerned?

Also… What happened to Angus the dog?

Also, Amelia finds herself with an ally in Dr.Shaw… but what about the facts behind Dr.Shaws son and what happened between him and Amelia, the whole situation seems a bit odd to me I think. There was only a mention of Ethan in passing once and the entire incident apparently did not reflect the relationship between Dr.Shaw and Amelia.

Overall, this was a very interesting addition to the series with a lot of secrets coming into play. A few new characters from the last book were put aside for now, but I have a feeling that it is not yet even close to being resolved. Lot’s of things are happening and this is becoming more and more addictive and it kept me on the edge of my seat the entire time.

12 responses to “The Visitor by Amanda Stevens”