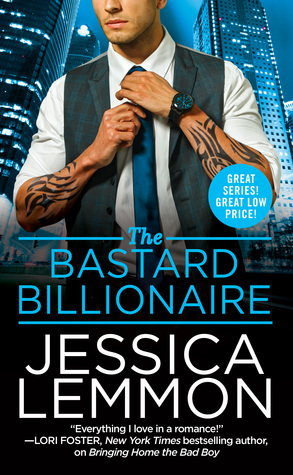 A BILLIONAIRE BAD BOYS NOVEL
Beauty and the Beastly Billionaire . . . Eli Crane is one tough bastard. After an explosion left him injured and honorably discharged from the Marines, all he wants is to be left alone. Yet his brothers insist he take a greater role in the family business. They've hired him ten personal assistants-and Eli sent each one packing as fast as possible. But when beautiful number eleven walks through the door, Eli will do anything to make her stay. Isabella Sawyer's employment agency can't afford to lose Eli Crane's business. Her plan: to personally take on the role of his PA, and secure her reputation with the wealthy elite in Chicago. But this beauty and her hot billionaire bad boy soon find themselves mixing business with pleasure in the most delicious ways. And passionate, stubborn Isabella won't rest until she tames this wicked beast . . .

Wow, so this one was a doozy. I read and absolutely LOVED the first book in this series, and was naturally curious about Eli the brother serving overseas. I always knew it was coming, since this trilogy features the Crane brothers, so when this one showed up in my mailbox, I had to read it.

Eli is back home from the war after going through a horrific experience. When his two friends die trying to save him from an explosion, Eli not only loses his leg in the incident but himself as well. Now he is back home and Reese, his older brother wants Eli to take over as the COO of Crane hotels – which Eli has no interest in doing.

So Reese hires a company to provide assistants to Eli in hopes of forcing him to do the work, but all the women that show up at his door, go running in terror from the big bad monster holed up in his cave, until of course the owner of the company makes the appearance herself.

Isa doesn’t like that every assistant that she sent over to Eli Crane doesn’t make it past a day or so. Since she has a reputation to uphold the owner decides to do the job herself, if only for a couple of days.

Guys, let me tell you. I absolutely LOVED the way this book started. I loved Eli and his grumpy bear persona and I loved Isa and her not taking crap attitude. There was a push and pull between them that was so entertaining. I found the entire thing ironic since Isa walked away from her family business and was trying to basically force Eli into his family business. The tension was great and then after they got together everything fell apart for me.

It ended falling flat, a bit boring and overall repetitive. I was expecting more and the way the book started, I thought there would be more. This book had SO much potential, but it almost felt like the author switched gears midway and went back to the comfort of her formula by the end of the book.

There was a plotline in the beginning of the book that was kind of left unexplored. There is a rocky relationship between Isa and her parents, and her parents don’t like the Cranes and how they built their money. Isa’s parents always wanted her to take over the business, but when she didn’t, they gave it to her ex-boyfriend. Well, at the celebration dinner for him, her mother wanted to force the two together, but Isa shows up with Eli to stick it to her parents. I felt like more could have been done here, but there was no more mention of her parents or how disgruntled they are.

I was also surprised where the author decided to take Eli’s future. Eli joined the military and never really had an interest in Crane Hotels, so I didn’t understand nor liked the ending. Eli started his own thing called Refurb and it was a charity for veterans that need help getting around the house. I LOVED that, I was really hoping his future was more focused on that.

And of course, this is where the formula kicked in. Eli doesn’t know what he wants for his future, even though EVERYTHING is going great between him and Isa and like the other book – he ends up hurting her. Big surprise there, I swear I rolled my eyes at that.

I wanted to love this more. The beginning of the book and I started off on a great note, but then it got boring, I started skimming, and some things that actually had potential were left on the sideline and the author went to her safety zone.

Overall, good… Nothing amazing, did not find this mind blowing, but I enjoyed the writing, and the characters and it was a pleasant read for the most part. I enjoyed it well enough to give it 3 stars.

19 responses to “Review: The Bastard Billionaire by Jessica Lemmon”