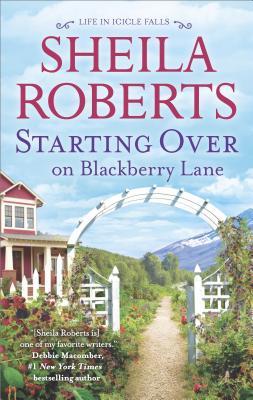 Time for a Change—or Three!
Stefanie Stahl has a husband with renovation ADD. He can't seem to finish anything he starts and her house is littered with his "projects." If he doesn't smarten up, she swears she's going to murder him and bury him under the pile of scrounged lumber in the backyard.
Her friend Griffin James is suddenly single and thinking maybe she needs to sell her fixer-upper and follow her career bliss up the ladder of success, even if that scary ladder is clear across the country. Getting her place ready to sell proves harder than she originally thought. She needs help.
She's not the only one. Cass Wilkes, their neighbor, has an empty nest—with a leaking roof. When her ceiling crashes in, she knows it's time to do something. When Grant Masters offers his handyman services at a fund-raiser auction, the three women go in together to outbid the competition and win their man. (Cass's friends think she should win Grant in a different way, too!) Now it's time to make some improvements…in their houses and their lives.

Funny story, despite the fact that I have a ton of Sheila Roberts books laying around Starting Over on Blackberry Lane is my first read from this author.

It was interesting. It follows three women in Icicle Falls, and they all happen to live nearby and are really good friends.

Cass is a forty five year old baker who owns her own bakery and most recently her roof collapsed over her dining room table. She is divorced and has a few grown children, but she is feeling very lonely until Grant Master’s shows up in town. He happens to look like George Clooney and a lot of women fawn and mistake him over the actor.

Stef is married, but is having a hard time with her husband who has decided to tear up the house and do some renovations. It is what Stef had wanted, but the problem is that her husband can’t seem to finish anything he has started and her entire house is a big giant mess. Luckily, a bit of Grant’s Honey-Do company is coming up – and Stef is adamant at winning it in hopes the handyman can finish the job.

Griffin is young and is about to get married, but at her bridal shower, she realizes it is no longer what she wants. She and her fiance had somehow grown apart. Steve is more interested in his video games than at her, and now they barely talk let alone spend time together. After breaking off her marriage, Griffin is looking for a fresh start in New York, where she hopes her food photography will take off. Of course she mets Master’s other son Matt, who is coming off his own marriage and sparks fly.

This was cute. I did mostly enjoy this book. It had a lot going on, a lot. It follows the residents of Icicle
Falls and thought this could be read as a standalone, other characters make an appearance regularly. For the most part, it felt like I was reading a show. The three women win the Honey-Do bid and decide to split the handyman in hopes of getting their houses finished.

The characters were fun to follow, for the most part. I could stand Stef though, she was absolutely horrible to her husband at times. I understood her frustration, but she treated him like crap and that wasn’t okay. She kept calling him frustrating and immature, but the only immature person in this book was her. She was difficult to like and I didn’t like her at all. I thought she was horrid and she never really grew on me after that, the damage was done.

Cass and Griffin were easy to like. I loved that Cass was a baker and was curious with all the mention of food in this book if there was going to be some recipes at the end – luckily for me, there are, so excited.

The romance was okay. Because it follows three characters and their relationships and how they are all looking to start over in a different kind of way (for Cass she wants to love again, for Griffin she is moving to a different chapter in her life and for Stef a new start with her marriage) it was hard to really connect with the romance. I connected with the characters, but I never really felt the romance and at times that was frustrating. The most frustrating part besides Stef and her horrible treatment of her husband was Cass and Grant because of their age difference. Grant was about sixteen years old and kept pointing that out through 90% of the book, I was starting to get annoyed, especially since Cass on multiple occasions mentioned she didn’t care. Grant was also quick to keep calling her out on her age and the difference and it was really just getting old – no pun intended.

The other thing that seemed to bother me was the eating and weight issue in this. I wasn’t sure if the author was trying to spin it into a good message or just use the way people act these days, but it was another thing on the list of frustration and gripes with this book.

Cass was a bigger girl and had an issue with her weight, she kept pointing out the fact that she wasn’t skinny and was gaining weight and yada yada yada. As someone who isn’t skinny herself it can get tedious reading about these women and their low self-esteem, it makes me feel like I don’t sit here and bitch and whine about my weight more often (excuse the language) but seriously – Cass does end up doing something about it because apparently people can survive on salads and egg whites alone.

Griffin was the opposite. She used to be fat and no longer eats. Well, she barely eats. Carbs is an enemy and she picks at her food and basically starves herself until Matt the cook comes along and literally forces her to try the food. Ugh, this was such a major issue for me. I get that people like that exist, but when body issues get mentioned over and over again in this book, it makes me feel like I need to fret over my own weight ever breathing minute of the day. It’s annoying.

Overall, I enjoyed it despite all the gripes and the long list of annoyances. I liked the feeling of the read and how there were so many characters and it was just a cozy page turner.

12 responses to “Review: Starting Over on Blackberry Lane by Sheila Roberts”