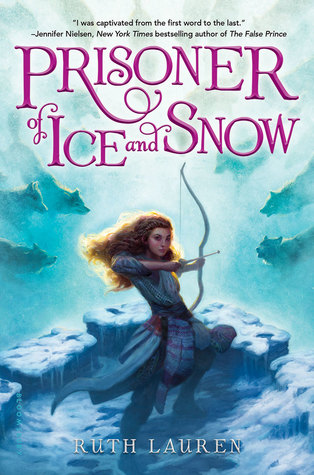 In a thrilling fantasy that’s equal parts Prison Break and Frozen, Valor attempts the impossible—breaking her sister out of prison.
When Valor is arrested, she couldn’t be happier. Demidova’s prison for criminal children is exactly where she wants to be. Valor’s sister Sasha is already serving a life sentence for stealing from the royal family and Valor is going to help her escape . . . from the inside.
Never mind that no one has escaped in three hundred years. Valor has a plan and resources most could only dream about. But she didn't count on having to outsmart both the guards and her fellow prisoners. If Valor’s plan is to succeed, she’ll need to make unlikely allies. And if the plan fails, she and Sasha could end up with fates worse than prison.
This fresh and exciting middle-grade debut effortlessly melds an unforgettable protagonist, a breathless plot, and stunning world-building—and is impossible to put down.

When Valor’s sister gets thrown into prison for stealing a music box that was suppose to bring a peace treaty to the land, Valor must do the impossible and try to break her sister out. Only problem is? No one has made it out of the prison in 300 years, but Valor is more than determined.

This was such a great novel. I love the world that Ruth Lauren has created. I could almost feel the cold from setting blanketed in a sheet of snow. The book itself is very character driven, which was awesome because I adored the characters.

Valor was brave and loyal. It was easy for me to like her, especially due to the strong bond she has with her sister Sasha and her determination to put her first and save her.

The book was fun and exciting to follow. Sometimes I forget the age of these kids as they try to find a way to escape the Prison and hopefully reveal the real thief. So as a reader, you have to keep in mind that this is a middle grade fantasy and suspend your disbelief by just jumping in and embracing the story for what it is.

I thought the writing itself was really wonderful and one of the best in Middle Grade books that I have come across. It was just so easy for me to lose myself in the story and it was just so well done. Like I have mentioned, sometimes I would even forget that this is a middle grade book largely due to the authors writing.

The pacing was really fast so I never had a moment where I was bored. I wanted it to last and was a little sad when it was over. It’s a great page turner and it kept me interested.

Overall, this book was a ton of fun and I think it be a great addition to Middle Grade reader’s bookshelf. Not only due to it’s interesting, different setting, but also due to the wonderful cast of characters and writing.

I am also excited to share Ruth Lauren’s stop on this blog and sharing with us how she built the fantasy world in her book.

How I built the book’s fantasy world

The idea for PRISONER OF ICE AND SNOW began when I was watching the TV show Prison Break with my son. The book was later pitched as FROZEN meets PRISON BREAK and although I wasn’t consciously thinking of Frozen when I wrote it, I’d seen Prison Break and I wondered what that sort of story would be like if it was about two young sisters instead.

The Russian inspired fantasy land part of the idea came soon after as I thought about where I could place the sisters to make their escape from prison even more challenging. I imagined a very cold and unforgiving climate and terrain and looked at images on Pinterest. I make boards for every idea that I have and I find it really helps me to visualize the world and individual scenes if can link them to a picture. I wanted a very cold, snowy, frozen world where the elements themselves could cause problems for the characters and bleed through into every part of the planning Valor has to do to try to break her sister out of prison.

Once the setting was fixed in my mind, the details had to reflect the landscape—the animals that inhabit it, the clothes the people need to wear, the food they might be able to access. My editor was brilliant at helping me think about other aspects that add to making the world feel real—like special celebration days in the city, the history of the prison and the geography involved with surrounding lands and how they might impact on the story.

I drew on elements of the Russian landscape and traditional clothing but I also wanted to create a matriarchal world where only women can rule and where they often have positions of power. This book is about girls and for girls (boys and everyone else welcome too!) and I wanted the sisters to

inhabit a world where it would never occur to them that positions of power weren’t open or available to them. They don’t have to struggle or overcome to gain those positions and they see women in every role in the book—from ruler to doctor to prison guard to hunter. Why did I plan that? Because it’s something every child should see reflected in books and in the real world. 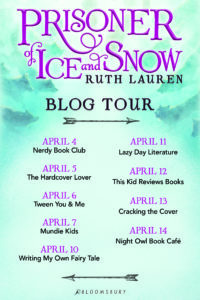 11 responses to “Blog Tour and Review: Prisoner of Ice and Snow by Ruth Lauren”