I hope everyone had a great mother’s day weekend. This afternoon I have Sophia Rose back with another review to start this lovely week. Hope you enjoy it and leave her some love. 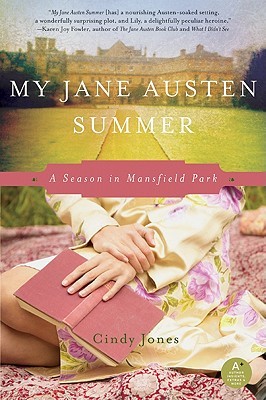 A down on her luck woman goes on an Austen-inspired journey of self-discovery in Jones's middling debut. After Lily Berry loses her mother, gets dumped by her boyfriend, and is fired, she finds in her passion for all things Jane Austen (Jane, indeed, is Lily's imaginary friend) an escape route: she travels to England to participate in a Jane Austen re-enacting festival. Full of enthusiasm—but not acting talent—Lily is not embraced by many of the Janeites, but this doesn't prevent her from meeting a charismatic actor, contending with an impossible roommate, and struggling with dark family secrets, all while trying to find the courage to be the protagonist of her own story. While Jones does a credible job of creating a heroine in transition, Lily's process of self-realization isn't nearly as involving as the subplots, which is quite unfortunate, considering how much time is devoted to sussing out her issues.

This book has been setting on my shelf for some time. I originally picked it up because I loved the idea of reading about a woman traveling overseas to work a summer gig as an actress and all around Girl Friday at a Jane Austen festival held on an English country estate. A fun ‘travel themed’ group read with my GoodReads group gave me the motivation to get going with this book.

I dove in with a little excitement and soon sat back on my heels. This was not going to be a light and fun summer read like I expected. The heroine, Lily, goes well beyond quirky. She has some very real issues that she is refusing to acknowledge by hiding between the covers of her favorite Jane Austen novels- her mother’s death, her father’s rapid replacement of his wife with a younger model, losing her job, losing her boyfriend whom she stalks thinking he’ll change his mind though he has moved on, and finally her determination that she can live out a life like/as a Jane Austen heroine got into some heavy issues and set the tone and pace of this slow moving gentle story.

There is a strong connection to Mansfield Park which I thought was handled well in a modern story. It’s not a one to one correspondence like a retelling which I thought was a smart move. It’s there and noticeable especially when Lily herself starts to not just realize, but purposes to follow the formula in the original novel seeing herself as Fanny Price fending of a rich man’s tempting assurances, pining over a man who has committed to someone else, dealing with disappointment and jealousy over a rival, and being tempted to be the woman who was seduced then discovered she was temporary goods.

While I appreciated some of this story, I stayed disconnected from it and the heroine throughout. I was glad to see her growing and finding herself, but my practical side kept screaming at me that she needed to seek some counseling to deal with the losses and grief and her unhealthy retreat into her imaginary world. She was very deep into that world and stayed there which I think plays a huge role in why I couldn’t get into her- I couldn’t find the real Lily very well. And that ending. Open. I know some people not only tolerate, but love them. I fall at the other end of the spectrum.

I think when all’s said and done, I would have appreciated this more if I would have anticipated this book differently. I didn’t pay attention to the way it was classified and labeled. I went in seeing a light, even comedic, read when it was more a serious women’s fiction about a heroine finding herself and putting distance with her past issues and fails.

So, it was a little satisfying and I’m glad I read it, but it is a story that left me still wanting.

22 responses to “Review: My Jane Austen Summer by Cindy Jones”