Hi Guys, hope everyone is having a great weekend. I don’t have much time today but I do have Sophia Rose on the blog with a YA Dystopia Romance review. Gosh.. I miss Dystopia books. Going to have to look into some I have not read yet myself. Anyway. I hope you enjoy your weekend and weather and leave this girl some love <3 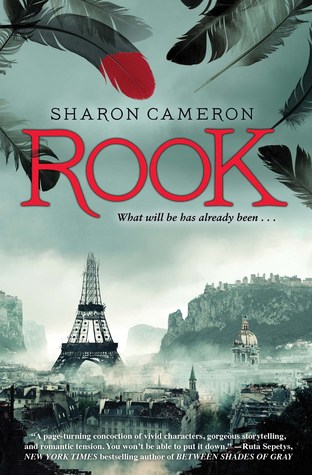 History has a way of repeating itself. In the Sunken City that was once Paris, all who oppose the new revolution are being put to the blade. Except for those who disappear from their prison cells, a red-tipped rook feather left in their place. The mysterious Red Rook is a savior of the innocent, and a criminal in the eyes of the government.
Meanwhile, across the sea in the Commonwealth, Sophia Bellamy's arranged marriage to the wealthy René Hasard is the last chance to save her family from ruin. But when the search for the Red Rook comes straight to her doorstep, Sophia discovers that her fiancé is not all he seems. Which is only fair, because neither is she.
As the Red Rook grows bolder and the stakes grow ever higher, Sophia and René find themselves locked in a tantalizing game of cat and mouse.
Daring intrigue, delicious romance, and spine-tingling suspense fill the pages of this extraordinary tale from award-winning author Sharon Cameron.

I discovered Rook had a connection to the old classic, The Scarlet Pimpernel, and it became a must-read for me. I love the old tale of a hero in disguise saving people from death during the time of the bloody French Revolution and I was keen to see how the basic elements of that story would play out in a dystopian YA context. Rook is a separate and independent story so a reader doesn’t have to have read the old classic to appreciate this one.

Rook opens on an intense and exciting first scene where the reader gets a first glimpse of the Scarlet Rook saving innocents from the prison just before they are meant to be executed and then leaving her disguise behind to play an entirely different role back home. It’s a story full of intrigue, plots, spies, and no one seems to be whom they pretend to be and most have a private agenda.

This was one that I had to pay close attention to what was going on, always. There are narrative shifts, swiftly changing scenes even from paragraph to paragraph (this was a niggle), and it’s a large cast of characters though Sophia (ha, love that) Bellamy is the main character. There are main plot threads and smaller ones. Things get confusing near the end and then a series of twists and reveals take place that left me both nodding my head because I saw some of it coming while others were shockers for me.

The dystopian world came about through the shift of the magnetic poles bringing our current world to a crashing halt and centuries later the world of Rook is the result. I found the big natural disaster followed by the domino effect it wrought on humanity was well-done and the social situation of Rook made sense within that context. The theme of this whole book could be that history has a way of repeating itself.

I liked the characters and how there is some depth to them. Sophia was a strong female lead with both brilliant and impetuous moments. Like many YA characters, she has youthful confidence that slips into arrogance at times. She started her double-life because of the excitement and danger before she settled into needing to help the desperate. It worked in this story because she also was given vulnerability and felt fear and uncertainty. She knew she and her friends were the only ones willing to step into the gap and do something for the poor folks getting slaughtered on the guillotine so a few corrupt officials could steal their holdings and keep the mob in a blood frenzy.

There is romance in this one, but it’s complicated by the fact that both individuals are living double-lives and aren’t sure where they actually stand. There is a sad unrequited love also. I do like that the ‘love’ word isn’t tossed around early or lightly especially with all the other things going on in this story.

All in all, this was a great tribute to the classic, but also an engaging story in its own right. A little slow and could get confusing at times, but also exciting and twisting. This is YA dystopian, but the setting is more like French Revolutions era so I think it would also have some appeal for those who enjoy YA Historical Romantic Suspense.