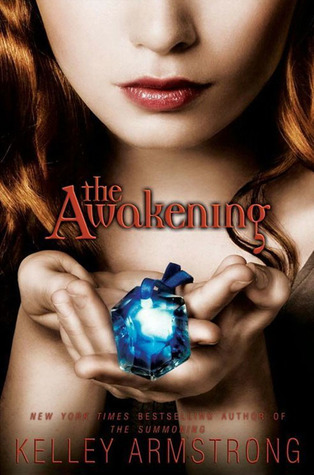 You don't have to be alive to be awakened.
Chloe Saunders is a living science experiment—not only can she see ghosts, but she was genetically altered by a sinister organization called the Edison Group. She's a teenage necromancer whose powers are out of control, which means she can raise the dead without even trying. Now Chloe's running for her life with three of her supernatural friends—a charming sorcerer, a cynical werewolf, and a disgruntled witch—and they have to find someone who can help them before the Edison Group catches them.
Or die trying.

The Awakening is the second book in the Darkest Power series and it follows directly in the aftermath of book one.

This review will contain spoilers from book one, so turn back now if you are not interested.

Chloe and Rachelle are captured after fleeing the Lyle House by the Edison Group – a group that seems to be responsible for what they are. After learning some unsettling facts about herself, Chloe and Tori break out and regroup with Derek and Simon to escape the Edison Group and find Andrew – their father’s friend.

Meanwhile, the Edison Group is hot on their heels and are refusing to give up.

This was another interesting reading. I am just completely addicted to Armstrong’s writing. I think she weaves and tells a story well and there is just something about the way she crafts her story and characters that makes it impossible for me to put down. I flew through the book and now sitting here awaiting book three to arrive in my mailbox.

The characters are slowly starting to grow and develop more. I like the long way Tori came from book one, but I also like the fact that she isn’t perfect and is still very Tori.

I adore the relationship between Derek and Chloe and how of all the characters they seem to click and understand each other the most. That being said, it does disappoint me a little that there is this weird triangle going on between Chloe, Derek, and Simon – one that I do not seem to understand. Chloe and Simon don’t have a connection at all and are barely together in the book. The relationship between Chloe and Derek is well fleshed out, so I am worried going into the last book to see where exactly this is going.

The ending of the book was intense and kept me on the edge of the seat but it did end a little abruptly and left me wanting to know what happens next.

Overall, this was another great read. Everyone’s powers are still developing so it’s kind of interesting to see how these kids are not perfect and don’t have much control  and are still working on figuring themselves out as they try to survive.

16 responses to “Review: The Awakening by Kelley Armstrong”