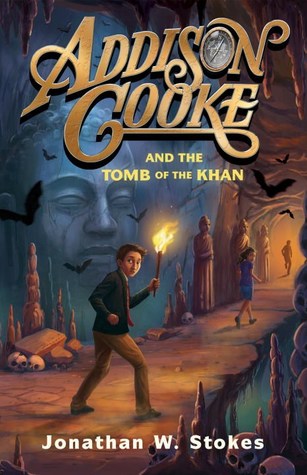 The Goonies meets Indiana Jones in Addison's second laugh-out-loud adventure! A journey through Asia in pursuit of the legendary tomb of Genghis Khan.
Fresh off of a victorious treasure hunt and rescue mission in South America, Addison Cooke just can't seem to steer clear of rogue bandits, pesky booby traps, and secret treasure troves. But it sure beats sitting around in school all day.
Addison's aunt and uncle, on the other hand, are none too happy about their habit of attracting kidnappers. When they become pawns in a dangerous gang's plan to steal the most prized possession of the notorious Mongolian leader Genghis Khan, Addison and his friends find themselves once again caught in the middle of a multi-million-dollar international heist. Armed with nothing but their wits and thirst for adventure, they travel across Asia in an attempt to rescue Addison's family and stop the treasure from falling into the wrong hands.
Brimming with round-the-clock action and tons of laughter, Addison Cooke and the Tomb of the Khan is perfect for fans of Indiana Jones, ancient history, and James Patterson's Treasure Hunters series.
Praise for Addison Cooke
"Combines the derring-do of Indiana Jones with a genuine archaeological mystery. Stokes brings a cinematic scope to the story. This lively debut promises more seat-of-the-pants thrillsfor readers who love adventure."--Booklist
"Cinematic pacing and action drive the story, but it's Addison and his friends who will keep readers engaged. Humor is never in short supply . . . and Addison's endless optimism and irrepressible confidence in his own abilities are endearing."--School Library Journal
"Addison is often one step ahead of the adults, but his lead is constantly threatened, building steady tension throughout the novel, screenwriter Stokes's debut."--Publishers Weekly

Schools out, summer is in, and Addison and his group of friends are off to Asia!

Trouble seems to follow Addison no matter where he goes, fresh of a treasure hunt and rescue mission in South America – Addison finds himself in a whole new set of trouble out in China.

When Addison and Molly’s Aunt and Uncle get kidnapped in China by the mysterious Madame Feng, they must use their knowledge as survival skills in order to beat Madame Feng to what she really wants – the Golden Whip from the lost grave of Ghenghis Khan.

This was a really fun read. At over 400 pages, the pace was steady and exciting. Addison is a very interesting 13 year old boy, who is witty, but a bit quirky at times. He hates germs, he loves to read and seems to always have the knack of knowing how to get his friends out of trouble.

The story and the progression was kind of interesting for me, because I was always interested in Mongolia and Ghenghis Khan. I actually did not know that his tomb/grave was purposely done so not even the Mongols could find it. I had to google that bit myself and the author did mostly stick to the fact at the beginning of the book about the possible locations and how he was buried.

I thought that was fun because not only does it provide middle grade kids with a fascinating plot, fun characters, great adventure and a strong set of friendships, it also educates quiet a bit.

I did have to take my time time with the rating because I wasn’t sure about a few things. I did have to keep in mind that this was a middle grade adventure novel and a lot of it does seem a bit out there, but that’s okay, because to me, it allows the children to get caught up in the excitement and imagination. That part I am fully aware of and perfectly fine with, despite some scenes. I especially loved how the author took the fact that they are kids into consideration and during a lot of scenes he limited their capabilities of what they can or cannot do. I love how they think it would play out in their head and how it actually happens is completely different because at the end of the day, Addison and his friends are still children. That kind of line of thinking was awesome and I think something that can be related to.

I wasn’t sure how the kids would relate to Addison thought because for a 13 year old, he is witty, he can talk circles around you and get himself out of sticky situations. He is also the type of kid that will read The Art of War. But, despite being a sort of prodigy (?) Addison still uses tactics that are childlike and it just makes you giggle.

This was a great book. It was fast paced. There is action, adventure, a mystery and it is really, really well written you guys. I absolutely loved the writing, Stokes just does a wonderful job that it even makes it really enjoyable for an adult because I forgot at several places that this was a middle grade book.

My favorite character I would have to say is Dax’s (the adult in this book) copilot Mr.Jacobsen a goofy Great Dane.

12 responses to “Review: Addison Cooke and the Tomb of the Khan by Jonathan W. Stokes”