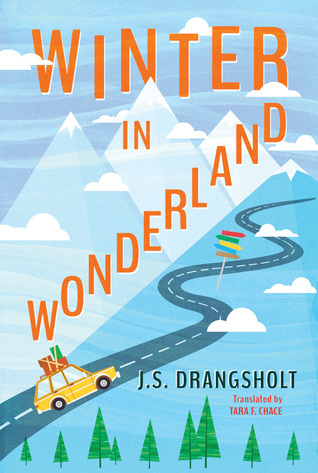 Professor Ingrid Winter seems to have it all. But she can’t help feeling like everything’s crumbling around her—just like the roof on her family home.
Now she and her husband are on the hook for repairs they can barely afford, and lack of funds means her husband must cancel his dream trip to Italy. Their three daughters are growing up too fast, her latest batch of students are more disaffected than ever, and there’s no one that she’s not disappointing. To top it all off, Mr. and Mrs. Perfect have moved in right next door.
Overwhelmed and anxious, Ingrid’s ready to take a hike. And the whole family, including Gramps, is coming along. A staycation in the mountains of Norway may be just what the Winters need. But will tromping through nature help Ingrid find the right path or send her deeper into the woods?

Ingrid Winters is a professor that seems to have it all, until things starts to fall apart around her.

Now Ingrid and her husband are on the fence because of the repairs they can barely afford on their home, and has put a wedge into her husband’s dream vacation to Italy. Her latest batch of students at the university are distracted and disinterested and to top everything off, a new couple Mr and Mrs Perfect move in next door.

I don’t know how to rate this book.

Ingrid was… An interesting character enough. I know people rated this book poorly in the past because they found Ingrid not very related, and a very unlikable character. I actually did not complete hate her. To me, she seemed real, and very much someone I can relate to. Motherhood isn’t perfect and neither is marriage, we get caught up in things we should not and we deal with things differently, sometimes with just the heat of the moment. I think because of translation, there was probably a bit of cultural disconnect, or people don’t feel comfortable admitting that there is a part of us in someone like Ingrid.

Ingrid wasn’t perfect. She got frustrated with her husband because of the roof incident and him not being able to work on it and she had every right to, especially when he decided to take the project on himself instead of paying for the contractor. There was a definite strain on their relationship to the point where Ingrid was questioning rather the two are going to get a divorce, but their marriage prevailed when both parties realized their short comings and maybe there was some truth in how Ingrid felt about the situation.

The story is simple and basically follows Ingrid as she navigates her life, parenting, and marriage. It’s not always pretty, there is strain, she ignores her middle child at some point because of the amount of stress she is already under. What I mean by ignores is that she forgot about her middle child’s play in school while she tried to deal with the fact that their house has a hole in the roof, her husband refusing to acknowledge the fact that the neighbor who promised to help, isn’t, the school is giving her problems because her rating is low among the teachers, her youngest child is being bullied in school and the list goes on. People did not like that, I found it realistic, especially when you take into the account everything that was going around Ingrid. We all want to be the perfect mothers, but we are also humans and I found her short comings very human, even if they are not favorably viewed and frowned upon.

Overall, I found this a quick read. There is a lot going on at the same time not much happens because the whole book is just about Ingrid navigating her life. There are cultural differences that get lost on anyone not living in the same part of the world.

Also, there is a bit of rambling, but that could be part of how it was translated.