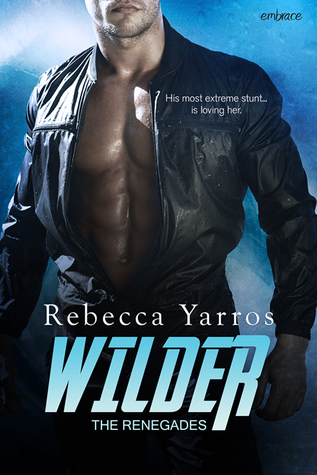 He’s Paxton Wilder.
Twenty-two-year-old, tattooed, smoking-hot leader of the Renegades.
Five time X Games medalist.
The world is his playground—especially this year—and for the next nine months I’m stuck as his tutor on the Study at Sea program.
He’s too busy staging worldwide stunts for his documentary to get to class.
But if I can’t get him to take academics seriously, I’ll lose my scholarship…if I don’t lose my heart first.
Six unlikely friends on a nine-month cruise with the Study at Sea program will learn that chemistry is more than a subject and the best lessons aren’t taught in the classroom…but in the heart.

Paxton Wilder is a motocross king and an adrenaline junkie, he is also the founder of The Renegades – a group of people who do crazy stunts.

Leah Baxter is his tutor who takes on a summer of semester at sea in return of being a tutor to someone on board. Lead is smart, stubborn and comes with a lot of scars. Paxton is carefree and wild. The only reason Paxton is even on the ship is due to his father’s demand that he finishes college or else the plug on his TV show is pulled and a ton of people lose their job.

Leah did not know exactly what she was getting roped into but soon she is thrown into an adrenaline driven, exciting and scary world of Paxton and The Renegades.

This was, interesting. I ended up enjoying it a lot more than I thought I would. The story was highly recommended to me by a friend who loves this series and me being in a romance slump, she felt would hopefully help me get past some of it. Though, I still feel stuck, I really liked Leah and Paxton they were very much polar opposite but they were so good together.

The chemistry was sizzling, the romance was slow and wonderful and the setting for all of this was just perfect.

Of course, this wouldn’t be a new adult romance without lots of heat and a mix of drama thrown in at the end, which I felt worked well for this.

I enjoyed the first 30% of the book a lot. It did plateau for me after that for a while, but at the end it did manage to pick right back up again and I found myself very invested and enjoying it.

Wilder was a good character, he had that bad boy streak without being overwhelming. Leah was sweet and it was obvious she cared a lot. I also found her to be really understanding and patient with Paxton despite everything she went through in the past.

I enjoyed this, maybe not as much as I wanted to but it was a great romance, with some heat, a bit of drama and a great overall setting.