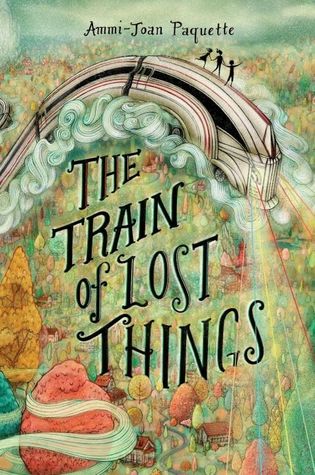 A magical story about a boy's love for his dying father and his journey to the mythic Train of Lost Things, where beloved lost objects are rescued and protected until they can be returned. Perfect for fans of The Phantom Tollbooth, The Bridge to Terabithia, and Lost in the Sun.
Marty cherishes the extra-special birthday present his dad gave him -- a jean jacket on which he's afixed numerous buttons -- because it's a tie to his father, who is sick and doesn't have much time left. So when his jacket goes missing, Marty is devastated. When his dad tells him the story of the Train of Lost Things, a magical train that flies through the air collecting objects lost by kids, Marty is sure that the train must be real, and that if he can just find the train and get his jacket back, he can make his dad better as well.
It turns out that the train is real -- and it's gone out of control! Instead of just collecting things that have been accidentally lost, the train has been stealing things. Along with Dina and Star, the girls he meets aboard the train, Marty needs to figure out what's going on and help set it right. As he searches for his jacket, and for a way to fix the train, Marty begins to wonder whether he's looking for the right things after all. And he realizes that sometimes you need to escape reality in order to let it sink in.
In this achingly beautiful adventure, it is the power of memories, and the love between a father and son, that ultimately save the day.

Marty receives a jacket from his father for his birthday, a few days before he finds out that his father has the bad kind of cancer. The jacket is meant for Marty and his father to build memories between the two of them, and for each memory, Marty get’s a pin to put on the jacket to remember his father by. When Marty and his mother travel back from a trip because his father is doing worse, Marty ends up losing his jacket. In order to find it, Marty has to believe his dad’s story about the Train of Lost Things and find a way to get on this mythical train.

This story was just wonderful. It’s a story about loss in different forms told in that fantastical, magical, mystical Middle Grade way. I found this story to be important and so well done. It was both beautiful and heartbreaking. The writing was great. The author really knew how to weave an emotional and important story with elements that children and parent’s will equally enjoy.

I find this book to be a keeper and an important one at that. It definitely allows you to use your imagination on an interesting setting of a magical train where your hearts most precious possessions go when they get lost.

I highly recommend this book for parents with children that read Middle Grade and it will go on my shelves for my son as a keeper as well.

12 responses to “Review: The Train of Lost Things by Ammi-Joan Paquette”