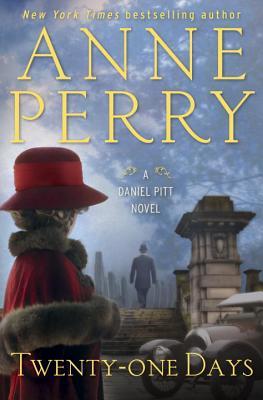 In this first book in a new series, Thomas Pitt's son Daniel races to save his client from execution, setting him against London's Special Police Branch.
It's 1910, and Daniel Pitt is a reluctant lawyer who would prefer to follow in the footsteps of his detective father. When the biographer Russell Graves, who Daniel is helping defend, is sentenced to execution for the murder of his wife, Daniel's Pitt-family investigative instincts kick in, and he sets out to find the real killer. With only twenty-one days before Graves is to be executed, Daniel learns that Graves is writing a biography of Victor Narraway, the former head of Special Branch and a close friend of the Pitts. And the stories don't shed a positive light. Is it possible someone is framing Graves to keep him from writing the biography--maybe even someone Daniel knows in Special Branch?
The only answer, it seems, lies in the dead woman's corpse. And so, with the help of some eccentric new acquaintances who don't mind bending the rules, Daniel delves into an underground world of dead bodies and double lives, unearthing scores of lies and conspiracies. As he struggles to balance his duty to the law with his duty to his family, the equal forces of justice and loyalty pull this lawyer-turned-detective in more directions than he imagined possible. And amidst it all, his client's twenty-one days are ticking away.

I love that the author is tackling the next generation with this first book in the Daniel Pitt series. I adored the long running series set in the late Victorian era about Daniel’s parents. This one is during the Edwardian Era and begins perhaps a decade after the last released Thomas and Charlotte Pitt book.

Daniel is fresh out of university with a law degree and his father helps get him in with a prestigious London law firm. Now he must prove himself to his new employer and to his father with his first courtroom case- a big one, since his client is in the dock for murder. No sooner than he finishes this trial than he is put on an even bigger one.

I loved getting to know this adult Daniel who has the best of both his parents in him and lots of promise. He’s vulnerable and also confident, but he has definitely been tossed into the deep end with these cases. I enjoyed getting to know the situation and the surrounding cast of characters.

The author uses her gift for historical setting, social issues of the day and a profound gift for writing complex characters to tell a steadily paced, twisting mystery. Daniel uncovers the clues that will either hang his detestable client or free him, but things get complicated fast leading close to home. The case brings out domestic abuse, the plight of people with disabilities, the issues of responsible writing when it comes to tell-alls, illegitimacy, women’s equality, and so much more. The author teases out these social issues as part of the plot without getting pedantic.

As usual, the mystery is not as easy as it looks from the beginning and the moral dilemma that comes with it is just as challenging for Daniel. The title refers to the fact that he has twenty-one days from the time his client is charged with murder and the hanging date. I started to get an inkling when the clues popped up, but that just made things more knotty instead of easier. I enjoyed how the mystery tied this first of Daniel’s cases back to the earlier series so his parents make an appearance, but also established itself in its own right.

I hope the new cast of characters will end up being regulars because I loved the Blackwoods with their shades of gray quirkiness, Daniel’s kind landlady, Miriam the female forensics scientist who is the daughter of Daniel’s boss.

So yes, this first in the new spin-off series was great. Love this peek at the Edwardian Era, a new main character, and a great twisting mystery plot. While I think a reader could get by starting with this book, it does have strong ties to the earlier Thomas and Charlotte Pitt series- and they are fabulous so why miss them. Definitely a recommend for historical mystery lovers.