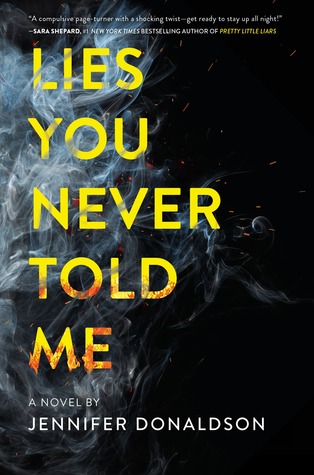 I received this book for free from Publisher, Bookish First in exchange for an honest review. This does not affect my opinion of the book or the content of my review.

Gabe and Elyse have never met. But they both have something to hide.
Quiet, shy Elyse can't believe it when she's cast as the lead in her Portland high school's production of Romeo and Juliet. Her best friend, Brynn, is usually the star, and Elyse isn't sure she's up to the task. But when someone at rehearsals starts to catch her eye--someone she knows she absolutely shouldn't be with--she can't help but be pulled into the spotlight.
Austin native Gabe is contemplating the unthinkable--breaking up with Sasha, his headstrong, popular girlfriend. She's not going to let him slip through her fingers, though, and when rumors start to circulate around school, he knows she has the power to change his life forever.
Gabe and Elyse both make the mistake of falling for the wrong person, and falling hard. Told in parallel narratives, this twisty, shocking story shows how one bad choice can lead to a spiral of unforeseen consequences that not everyone will survive.

A Young Adult novel that is told from two different characters, Elyse and Gabe.

Elyse is a quiet, shy girl with a ton of her own secrets that she is hiding, so she is shocked when she get’s lead as Juliet in the school play. But, there is someone at rehearsals that seems to catch her eye, even if Elyse known being close to them would be a big mistake.

After getting hit by a car and rescued by a stranger, Gabe breaks up with his girlfriend Sasha. Sasha is popular and headstrong, and she isn’t willing to let Gabe go. Sasha is willing to do anything to get her boyfriend back, even if it means crossing some lines.

Gabe is drawn to a new girl, Catherine in the school, but falling for the new girl might turn out to be a massive mistake.

This was really enjoyable, I liked that it was fast paced and I was never really bored. The author took some liberties of crossing some lines. Thought this is a Young Adult book, I felt like it did deal with some adult themes, so I would not recommend this for teenagers under 16 years old.

I did feel like Sasha being the mean girl scene could have been better handled by Gabe if he took a few second to think about his own actions instead of flying by the cuff. I also did not know how she can act the way she did and her own parents did not notice the unstableness of their own daughter because Sasha did some things that no sane person is capable of, there should have been signs and in the most obvious way there was.

I gave this book a 3.5 because the ending did shock me and threw me off. I kept wondering how Elyse and Gabe are tied into all of this and I couldn’t believe I did not see it. That was a great surprise and it worked out awesome.

11 responses to “Review: Lies You Never Told Me by Jennifer Donaldson”