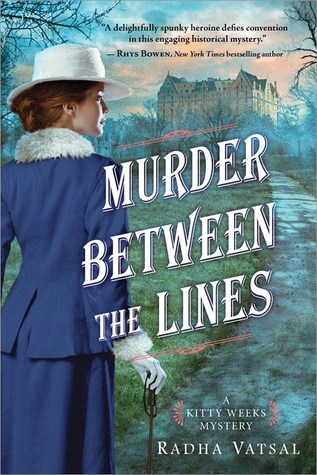 I received this book for free from Publisher, Tantor Audio in exchange for an honest review. This does not affect my opinion of the book or the content of my review.

In the second book in the acclaimed Kitty Weeks Mystery series, Kitty is tasked with writing a story about Westfield Hall, a prestigious girls' boarding school. Tragedy strikes when a student named Elspeth is found frozen to death in Central Park. The doctors proclaim that the girl's sleepwalking was the cause, but Kitty isn't so sure.

Determined to uncover the truth, Kitty must investigate a more chilling scenario—a murder that may involve Elspeth's scientist father and a new invention by Thomas Edison.

For fans of Susan Elia MacNeal and Jacqueline Winspear, Murder Between the Lines is a rich and spirited novel with irresistible charm, combining true historical events with a thrilling mystery.

Kitty is a reporter for a women’s page in a newspaper. When she is tasked with writing a story about Westfield Hall an all girls prestigious boarding school, a tragedy strikes when a student named Elspeth is found frozen to death. A doctor has proclaimed the death as an accident, saying Elspeth was sleepwalking, but upon further investigation, Kitty isn’t so sure it was an accident at all.

As Kitty dig into Elspeth’s life, she uncovers a world of politics that can lead more than one person into danger and that sometimes harmless accidents can turn into murder.

This was an interesting story, I found it enjoyable and the ending was surprising to me as it did not end in a traditional style that most murder mysteries do. It was kind of refreshing and left Kitty I think in a situation that is unpleasant.

The audio book was great. I think Justine Eyre did a good job with the voice and bringing Kitty’s personality forth, she also did a great job with some of the other characters and their accents when needed. Justine Eyre does have a sort of mellow undertone that can be very soothing.

The problem I ran into in this book is the choppy writing. I struggled at the beginning because I thought the audiobook was cutting off mid chapters. The transitions, or jumps, were uncomfortable at times and it might have not been too bad while reading it but it felt frustrated in the audiobook. We would in one place in the chapter and it would jump ahead into another scene then cut into another and it felt a bit disjointed so it ended up feeling a lot like the chapters kept getting cut off, especially if you sped up your listening speed.

Overall, I enjoyed this series, glad I met Kitty and hope to see where she will take us next.

7 responses to “Audio Review: Murder Between the Lines by Radha Vatsal, Justine Eyre(Narrator)”