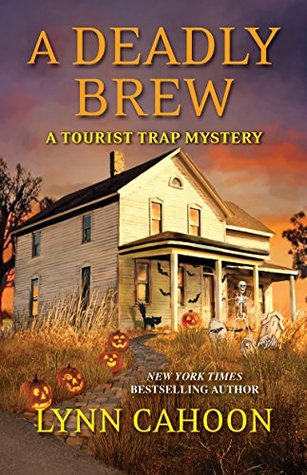 As Halloween approaches South Cove, California, four couples get into the spirit of the holiday by conjuring up spirits. . .
The house has sat empty for fifteen years, taking up prime real estate along the picturesque coastline. Built by one of the founders of South Cove, its last known owner, Maryanne Demerit, vanished without a trace. Now her home will be demolished for a condo development, but until then, it’s the perfect spot for a Halloween haunted house.
Jill Gardner, owner of Coffee, Books, and More, her boyfriend, and three other couples are spending the weekend in the Demerit home. But what begins as an all-in-good-fun fright fest turns into a mystery begging to be solved as Jill is contacted by the ghost of Maryanne . . .

A light spooky cozy mystery from the Tourist Trap mystery series caught my eye when I was hunting for an Autumn seasonal read. It was my first time with author and series and it was a great experience that has me eager to return for more.

A Deadly Brew is book 9.5 in the A Tourist Trap Mystery series. It probably wasn’t the best place to start as it was obvious that the heroine and those in her circle had prior experiences together, but, that said, I had no trouble diving in because the author gave a brief intro to the characters and setting as it appeared in the story.

This was a quick read novella that falls between the usual novel-length mysteries. It was a lock in haunted house weekend for four couples. They wanted to explore the old house by the sea that would be torn down for developments and have a nice weekend getaway. But, strange things start to happen and Jill Gardner, local bookshop owner and amateur sleuth, begins to wonder if the ghost of the long time missing owner is trying to help her discover the truth of what happened back in the past.

The four couples were a fun group together and I liked the cold case and spooky manifestations. I thought their time at the old spooky place was fun and entertaining. The backstory and descriptions of the world and setting were minimal and things moved along swiftly with the mystery, but it worked just fine for an afternoon quick read. The heroine Jill was engaging enough and I liked the time with her boyfriend the town police detective, her friends and neighbor. It did have a nice twist or two even if it was a light-weight story.

I think those looking for a fun, light cozy mystery that would be perfect for Halloween would find this one a good bet. 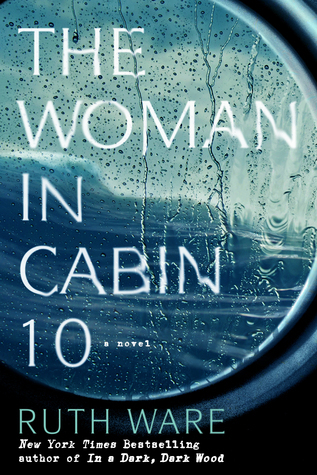 In this tightly wound, enthralling story reminiscent of Agatha Christie’s works, Lo Blacklock, a journalist who writes for a travel magazine, has just been given the assignment of a lifetime: a week on a luxury cruise with only a handful of cabins. The sky is clear, the waters calm, and the veneered, select guests jovial as the exclusive cruise ship, the Aurora, begins her voyage in the picturesque North Sea. At first, Lo’s stay is nothing but pleasant: the cabins are plush, the dinner parties are sparkling, and the guests are elegant. But as the week wears on, frigid winds whip the deck, gray skies fall, and Lo witnesses what she can only describe as a dark and terrifying nightmare: a woman being thrown overboard. The problem? All passengers remain accounted for—and so, the ship sails on as if nothing has happened, despite Lo’s desperate attempts to convey that something (or someone) has gone terribly, terribly wrong…

I took one look at the quote on the back cover “if you’re a fan of Agatha Christie…” and read a few of my favorite book bloggers talking this one up and I just had to read it. I was unfamiliar with the author until this book released so I was eager to give her a try.

Well, I really wanted to say I loved this one and I was riveted, but that turned out not to be the case. I think I went in with incredibly high expectations and an expectation of a Christie whodunnit when this wasn’t Christie and it wasn’t fair to give it such a high standard to reach. This one was by no means lousy and the writing was strong and good. The setting of a cruise off the coast of Norway and the assembled group of high flyers and travelers was a nice International Intrigue feeling. There is a sense of wondering if the narrator is reliable or not which I do love. I liked the ‘did it really happen that way? Was it even real?” Quite a clever premise and set up.

But, when it came down to it, The Woman in Cabin 10 turned out to be a so-so read for me until the last third when it finally grabbed me. If I hadn’t seen others I trust loving on it, I might very well have stopped reading early on.

I didn’t connect with the female protagonist, Lo. I didn’t hate her, but I didn’t exactly like her or admire her either. She’s not a nice person and she drinks enough to destroy her liver and is definitely an alcoholic which is nuts since she’s got an anxiety disorder and is on medication. I think I was meant to be wary of connecting with her and wondering about her part in all this.

No, what almost had me it setting aside was me impatiently waiting for something to happen between little blips of action or suspense. I found the action-suspense points good, but the slow built to each one had me drifting as I flipped pages waiting for the next intense moment. I didn’t feel like there was a point to much of it like it was treading water until the next momentous event could occur and I spent a lot of time in Lo’s head which wasn’t interesting to me and was frankly annoying because she dwells on stuff and leaps with her logic. To be fair, I might not have been in the right frame of mind for this style of psychological thriller. I think I was looking for a more pounding pace which is why the last portion was when I finally clicked with this book. It just took off like a rocket and left me breathless and twitching for what would come next.

So, in the end, I was glad to have read this one and I do want to read more of the author’s books, but now I know what to expect and I think that will make all the difference in the world.