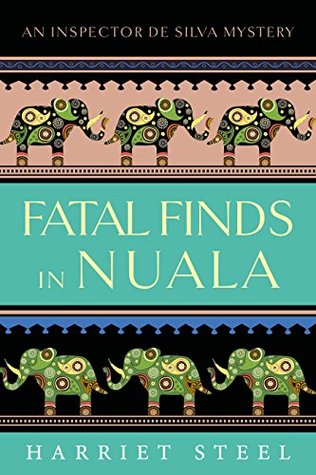 In this fourth instalment of the Inspector de Silva mysteries, it is monsoon season in the Hill Country. One stormy night, a ghostly encounter on a lonely road leads de Silva into a case of murder, and a mystery that stretches back to Ceylon’s distant past. To uncover the truth, he will have to face death and his inner demons. Fatal Finds in Nuala is another absorbing and colourful mystery in this series that vividly portrays Sri Lanka’s Colonial past.

I have come to really enjoy this engaging historical cozy mystery series set in Ceylon of the 1930’s. In this installment, Shanti, Jane, and Archie Clutterbuck engage in an archeological mystery in the jungle outside Nuala that involves murder during the height of the Monsoon season.

Fatal Finds in Nuala is the fourth of the Inspector de Silva mysteries. This is a series that is enjoyed best when read in order, but is versatile so it can easily be treated as a series of standalones, too.

There is a lovely blend of exotic location, time period, engaging characters, and a clever mystery. I love that the detective is non British and a native Singalese of middle-age. Shanti is thoughtful and clever. He respects others and struggles to be patient when he isn’t accorded the same and it interferes with his work.

A chance breakdown begins the chain of events that leads him to investigating a villager’s murder that seems to be connected with curious, but not necessarily priceless coins from the Kandy empire era. Or are they worthless? Shanti’s instincts are aroused even with few facts. His boss, Archie, is in an expansive mood, so he pursues thread-like leads.

Unlike some cozies, this series have some pretty exciting moments of danger and action. I do enjoy seeing Shanti get himself out of some tight situations and the setting of jungle and the poor weather adds to the suspense. And, it’s fun when the lightbulb comes on and he nails the villain. This was one where there is some foreshadowing that puts the reader onto some of the truth before the facts got there for the reveal. That said, I didn’t have it all figured out.

There were a few sweet moments when Jane comes along with Shanti to find clues in the jungle and a trip on the train to visit the city where they met.

So, it was another solid entry in the series and leaves me eager for more. Definitely a recommended series.