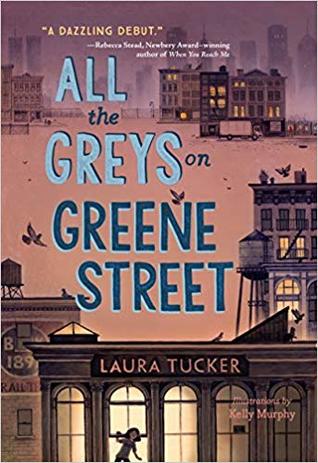 SoHo, 1981. Twelve-year-old Olympia is an artist—and in her neighborhood, that's normal. Her dad and his business partner Apollo bring antique paintings back to life, while her mother makes intricate sculptures in a corner of their loft, leaving Ollie to roam the streets of New York with her best friends Richard and Alex, drawing everything that catches her eye.
Then everything falls apart. Ollie's dad disappears in the middle of the night, leaving her only a cryptic note and instructions to destroy it. Her mom has gone to bed, and she's not getting up. Apollo is hiding something, Alex is acting strange, and Richard has questions about the mysterious stranger he saw outside. And someone keeps calling, looking for a missing piece of art. . . .
Olympia knows her dad is the key--but first, she has to find him, and time is running out.

12-year-old Olympia is an artist living in SoHo in 1981, which isn’t all that uncommon in her neighborhood. Her father and his friend Apollo bring antique paintings back to life, while her mother sees the beauty in everything and makes intricate sculptures out of everyday ordinary items. But one morning she wakes up and her father has left the country, leaving her and her mom alone and now her mom won’t get out of bed. The only thing he left behind was a cryptic note that he asked for it to be destroyed. Apollo is acting strange and someone keeps calling for missing artwork.

This was a quiet, well-written book that circles around family, friendship, art, and mystery. It touches on the subject of depression and what it means living with a parent who suffers from depression. It was easy to forget at times that Olympia was only 12-year-old girl that did not know how to deal with her mother unable to get out of bed and some of the scenes tugged on my heartstrings for the little girl that held out hope. But it was nice to see that when she finally let them, Olympia did have a great support network behind her back that ended up being there for when she needed them most. I liked that it revolved around art and there was even a bit of a mystery thrown into the mix.

Laura Tucker’s writing overall is quiet and beautiful. Tucker really knows how to flesh out her characters and make them appear human. I found myself sympathizing with her.

That being said, however, I struggled with the pacing of the book. I felt like the story started out and ended strong, but it meandered a bit in the middle. It could have been a bit shorter. The subject matter for middle grade was a little hard, but depression can hit an adult any point in child life, even if it is something hard to read. I also do wish the time period was used a bit more in the writing. The story is definitely very character and art driven, but it was set in 1981 in SoHo and I found the time and setting interesting choice.

Overall. I thought this was a lovely written debut that makes me extremely excited for future works from this author. It touched on tough subjects, but very important ones. I thought in general, the author handled it really well and I cannot wait to see what she does next.

Laura Tucker has coauthored more than twenty books, including two New York Times bestselling memoirs. She grew up in New York City around the same time as Olympia, and now lives in Brooklyn with her daughter and husband; on Sunday mornings, you can find her at the door of Buttermilk Channel, one of their two restaurants. She is a cat person who cheats with dogs. All the Greys on Greene Street is her first novel.

13 responses to “Blog Tour: All the Greys on Greene Street by Laura Tucker”