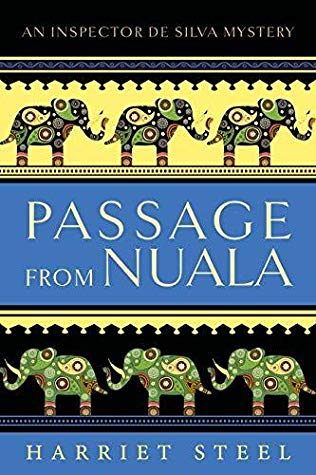 Inspector de Silva and Jane embark on a cruise to Egypt to visit the pyramids, excited at the prospect of two weeks of sun, sea and relaxation. With Nuala, and de Silva’s duties as a police officer, far behind them, what can possibly spoil their plans? Then a writer is found dead in his cabin, suffocated by newspaper thrust down his throat. Once again, de Silva must swing into action.The Inspector de Silva Mysteriesis a colourful and absorbing series, spiced with humour. Set in Ceylon in the 1930s, it will appeal to fans of traditional and cozy mysteries.

A detective mystery series set in 1930’s Ceylon (Sri Lanka) with a Singalese detective during the British Colonial period has produced a series of engaging, clever mysteries and characters. I was thrilled that this latest took our dear Inspector Shanti de Silva and his beloved wife Jane to sea where even a holiday trip can be murder.

Passage From Nuala is the sixth book in the series. Each book could be read standalone though the players and situation are introduced more thoroughly in book one and expanded upon through each book. For instance, the de Silvas are joined by the Petries in this one and it was fun to get to know a different side of that couple from their earlier introductions.

Much of the book was a fun story of Shanti and Jane’s travel adventures aboard ship, a stop in Bombay, and shipboard life. They are in tourist class, but join the Petries now and then for the first class. Then, of course there is a murder and Shanti and Mr. Petrie are kept busy investigating while keeping it all hush hush. They have to solve it before the cruise ship reaches Port Said and the guilty party can slip away.

As always, the author dots her stories with fascinating people of all walks of life from the below decks international serving crew to the upper crust who are traveling in exotic ports of call. Shanti and Jane meet with some reservations, but also some acceptance for their interracial marriage. It was fun to see Shanti get a surprise as to just who falls into which group.

The murder was a seeming perfect one at first with few easy clues, motives, or opportunities, but slowly Shanti, Petrie and their wives untangle the threads. There were a few good red herrings to put me off the scent. I’ll be honest. I had the obvious suspect and knew there was a second one, but no idea who so I found out when Shanti did.

The 1930’s setting was played forward even with life aboard the cruise ship. The author isn’t heavy handed with historical description, but it is there in the background so the reader is well aware of the surroundings of the story.

Another solid entry in the series that continues to be a favorite. Definitely recommend to historical cozy mystery fans.