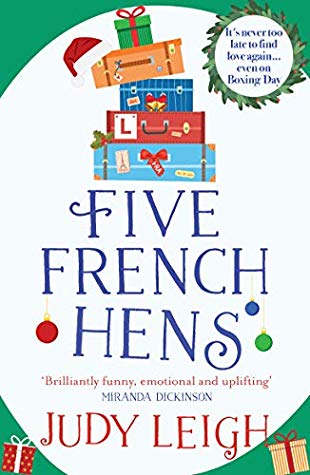 The best days of your life might be still to come…
When 73 year old Jen announces that she is going to marry Eddie, a man she met just a few months previously on a beach on Boxing Day, her four best friends from aqua aerobics are flabbergasted.
The wedding is booked and, when the groom decides to have a stag trip to Las Vegas, the ladies arrange a hen party to beat all others -a week in the city of love, Paris.
From misadventures at the Louvre, outrageous Parisian cabarets, to drinking champagne with a dashing millionaire at the casino, Paris lives up to all their hopes and dreams. But a week can change everything, and the women that come home have very different dreams from the ones who got on the plane just days ago.
Funny, fearless and with a joie de vivre that reminds you to live every day like it’s your last. Judy Leigh has once again written the perfect feel-good novel for all fans of Cathy Hopkins, Dawn French and Fiona Gibson.Praise for Judy Leigh’s books:


When Jen says ‘yes!’, that is the catalyst for five golden girl friends to go on a tour of discovery about themselves and each other in the city of lights. I loved the idea of gals in their seventies finding adventure with their friends, healing, understanding, and even love so I gladly picked this one up and settled in for a coze with the Five French Hens.

Jen is a widow in her seventies who already found love and the good life, but now she is lonely so when proper gentleman Eddie courts her and proposes, she says yes. But, Eddie is headed to Vegas for his bachelor festivities and that decides her that she and her best buds should do something just as spectacular for her hen party. So off they go to Paris.

Jen is accompanied by four friends with their own life struggles and need for this friendship and this trip. Pam, Rose, Tess, and Della. Della is happily married to Sylvester the love of her life, but she worries about him working in that drafty food truck on the coast and looking more worn out each day. Pam is happily single except for Elvis her dog companion, but she is holding in a secret that eats at her and holds her back from life. Rose is a widower and accomplished musician. She was content in her marriage, but not fulfilled when she gave up her career for home and family to a husband who never respected her own talents. And, then there is lively and colorful Tess who is marginalized in her own home behind golf and the golf game on TV. She is determined to live a little and maybe rethink how she has been holding onto something that just isn’t there and never was.

This standalone women’s fiction started out slow as it passed the narration around rapidly between the five women. At first, I got confused as to who was who and it was a struggle to get interested. They all seemed like real people with real life problems, but I wasn’t feeling a spark of connection.

But, I hung in there because I wanted to get to Paris with them and that’s when the book started to come to life. Each woman was distinct now and I grew vested in a few of their stories and then more and more as the book progressed through their lively and fun time in Paris. It was Paris through the eyes of tourists like visiting the Louvre, the Eiffel Tower, Arc de Triomphe, jazz club, casino, and more. I was loving it.

What I really loved, though, was when the layers were peeled back on these women’s lives and I could get to know their pain and their dreams. It took a while, but the book got there so that when it ended, I wasn’t ready to leave the gals behind. They each had something to face whether from their past, their present, or a decision about their future. I was totally rooting for them just like they were rooting for each other.

I had never heard of this author before, but now I’m interested in reading more of her niche stories about folks with silver hair and most of their life behind them, but still have some adventures left to live. There is a little romance in this, but the focus is definitely on their personal growth and friendship so it’s very much women’s fiction and I’d recommend it as such.

I rec’d this book through Net Galley to read in exchange for an honest review.

In the original Pride and Prejudice, Elizabeth Bennet’s friend, Charlotte Lucas marries the silly and obsequious clergyman, Mr. Collins. But what if fate—and love—intervened?

Desperate to escape her parents’ constant criticism, Charlotte has accepted a proposal from Mr. Collins despite recognizing his stupid and selfish nature. But when a mysterious man from her past visits Meryton for the Christmas season, he arouses long-buried feelings and causes her to doubt her decision.

James Sinclair’s mistakes cost him a chance with Charlotte three years ago, and he is devastated to find her engaged to another man. Honor demands that he step aside, but his heart will not allow him to leave Meryton. Their mutual attraction deepens; however, breaking an engagement is not a simple matter and scandal looms. If they are to be happy, they must face her parents’ opposition, Lady Catherine’s disapproval, dangerous figures from James’s past...and Charlotte’s nagging feeling that maybe she should just marry Mr. Collins.

Charlotte had forsworn romance years ago; is it possible for her to become romantic again?

Ever have those side characters in a beloved story that get a bittersweet storyline? Charlotte Lucas from Jane Austen’s Pride & Prejudice is one of those characters for me. I do get that her temperament and outlook make her an unlikely romance heroine, but author Victoria Kincaid asks ‘what if…’ What if she was disappointed in love earlier in her life? What if her poor prospects were worse than anyone knew? What if the only escape was a disgusting twit? Oh yes, I was eager to explore the now dismal situation of this underdog heroine.

Charlotte Lucas is the oldest daughter of a puffed up, social-climbing pair who are disappointed in their plain, sensible daughter and do not hesitate to put her down and make her miserable. They will do anything to dispose of Charlotte off their hands even marrying her to one of the silliest and unattractive men who happens to be the heir to a local estate. And, Charlotte, because she sees a long life of her parents insults and resentment about providing for her, just wants a home of her own and children she can give her love. She’s not romantic after all, she reminds herself as she slams the door on her memories of a past when she- but no, best forgotten.

James arrives in Hertfordshire three years after the events in Bath when Charlotte broke their engagement and it was all his own fault. He finds her getting set to marry and tries to tell himself to wish her well and move on. But, quiet, calm and steady Charlotte who once looked on him with such love and now only looks dull and lifeless remains on his mind. If only he had arrived only days earlier.

This is a Regency romance. It’s set during the Christmas Season of 1813 with flashbacks to three years earlier when Charlotte’s family visited Bath and she first encountered James Sinclair. But, it’s also set against grander world affairs like the Napoleonic War which plays its role by providing an espionage element.

The story is more of a long novella so develops swiftly. That said, it was not under-developed. I loved the situation the author set up in Charlotte’s personal life with her miserable family so that she is desperate and takes the only offer she thinks she’s going to get. And, then for James to arrive and explain too late. There was good tension and conflict.

The characters were painted well with Charlotte the average heroine many of us can relate to. She’s a thinking woman who tries to make the most of her situation even though it seems like to her vivacious best friend Elizabeth thinks she is settling. She takes the hits in life and sucks it up. I didn’t know how she could get away from the skeavy Collins or how James was going to fix what he broke, but I was definitely vested in finding out.

James just caught a bad break and duty to his country had to come before his own happiness. I wanted him so badly for Charlotte when I saw how sweet and honorable he was. He, too, is an average guy asked to step up against a cunning French spy.

And, just as much as I loved the main characters, I enjoyed boo-hissing several of the cast of characters like James’ aunt, and Mr. Collins’, Charlotte’s would-be fiance’. They were comical on one level, but I think her parents were the worst belittling and emotional abusing their own child. I wanted Charlotte out from under their thumb.

I do enjoy a good reunion romance and this one was just the thing. While this is considered a Pride & Prejudice variation, it is really a separate story of a side character getting her chance at love. Austen fans will spot settings and some familiar characters in the background while newcomers won’t be lost in the least. I would recommend this to both Austen fans and those who enjoy a sweet, heartwarming second chance romance.

My thanks to the author for the chance to read this book in exchange for an honest review.