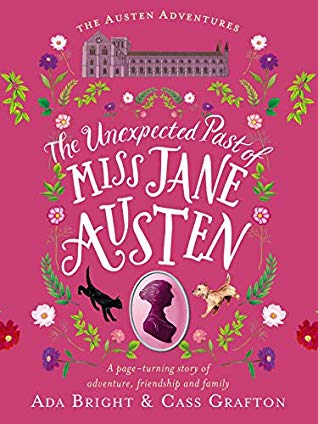 Rose Wallace thought her time-travelling adventures were over. Jane Austen is about to prove her wrong.
After becoming trapped in present-day Bath due to a mishap with her time-travelling charm, Jane Austen is safe and sound back in the 1800s thanks to Rose’s help. Now, Rose is ready to focus on her fledgling romance with dreamy Dr Aiden Trevellyan.
But when Jane reappears in the present, it looks like Rose and Aiden have no choice but to follow her back to 1813…
Staying in the Austen household, Rose and Aiden are introduced to a number of interesting figures from the past, including Jane’s eccentric – and surprisingly modern – neighbour. Suddenly Rose’s life is in need of a re-write as she discovers some unexpected ties to Jane Austen's world and her past.

After adoring The Particular Charm of Miss Jane Austen and getting that tantalizing teaser there at the end while needing to get more time with Rose and Aidan, I was primed and ready when this sequel arrived. Another engaging installment in the Austen Adventures series.

The Unexpected Past of Miss Jane Austen is a follow up sequel and works best when read in order.

Rose and Aidan have just come to a tentative understanding to start seeing each other when who should appear back in Rose’s day, but Jane Austen herself requiring Rose to come with her back into the past because Jane needs her. Rose is pretty sure telling Aidan the truth and dragging him into this latest time-traveling venture will scotch her chances with him for good when he runs from the crazy woman who thinks her friend is the real Jane Austen and that she can travel through time. But, Aidan surprises her and stands fast even when forced into Regency gentleman’s attire and the inconveniences and mode of the past. She is not able to turn her focus to the mysterious mission Jane feels she needs to be there for in the past.

In my mind, it was only to be expected that after traveling into alternate reality and being such an Austen fan that Rose would get an adventure into Jane Austen’s past. I already thought this pair of authors treated well the situation of Rose, an Austen fan, and later Jane Austen’s arrival on scenee with their meticulous attention to all the important details. This was even more so when Rose and Aidan go into the past and see it all first person. Life in Regency Era Chawton Cottage and the Great House were brought vividly to life.

The characters were nicely fleshed out. Aidan’s enthusiasm for seeing his archeology projects two centuries before and exploring Regency life with a historian’s eye as he mingled with the Austen men and quietly strengthened his relationship with Rose. Then with Rose being troubled by the time travel, by a vulnerability where Aidan was concerned, and then of course her mixed feelings on the matter Jane wishes her to believe in. Later, there is the tension about being in the past or going back to the present. I felt Rose was come into her own and more confident in herself even with all the precarious situations she had to navigate.

The neatest part, as an Austen fan, was seeing Jane in the setting of her family that included her beloved sister Cassandra, her mother, and two of her brothers, Charles and Edward. They were all in on Jane’s secret and had varying responses to a time traveling, novel-writing family member. I was as jazzed as Rose’s bestie Morgan to see a literary rock star right where she lived.

But, probably the most poignant story thread wasn’t even the romance though I did love the deepening of that. It was a surprise reunion for Rose. I teared up a few times over it and particularly in the end.

This wasn’t a dramatic book, though there are most definitely tense moments, heartwarming scenes, and times of excitement. It was gentle and paced out slowly. There were lag moments for me when I was antsy for faster progress, but for the most part, I was content to relax into the world and characters’ lives the authors painted.

The catalyst for the story and the reason there was so much tension was Jane Austen’s charm. I loved getting the story behind it at last and seeing the charm necklace as a book character in itself.

Things ended on a high note, but I felt there was the opportunity for more story if the authors wished it. Because, yes, there was another tantalizing bit at the end that could lead to further adventures in time for Rose and Aidan.

All in all, this was a heartwarming, gentle story of time travel, love and friendship, family reunion, and a dream come true for a Jane Austen fan due to a dash of whimsy brought by a certain charm. Those who enjoy women’s fiction with a spot of magical realism and cozy time travel stories particularly if they are Jane Austen lovers should give this one a chance.