Sebastian Gage returns home to battle the ghosts of his past and prevent them from destroying his future with Kiera in the latest exciting installment in this national bestselling series.
July 1831. It's been fifteen years since Sebastian Gage has set foot in Langstone Manor. Though he has shared little with his wife, Lady Kiera Darby, about his past, she knows that he planned never to return to the place of so many unhappy childhood memories. But when an urgent letter from his grandfather reaches them in Dublin, Ireland, and begs Gage to visit, Kiera convinces him to go.
All is not well at Langstone Manor. Gage's grandfather, the Viscount Tavistock, is gravely ill, and Gage's cousin Alfred has suddenly vanished. He wandered out into the moors and never returned. The Viscount is convinced someone or something other than the natural hazards of the moors is to blame for Alfred's disappearance. And when Alfred's brother Rory goes missing, Kiera and Gage must concede he may be right. Now, they must face the ghosts of Gage's past, discover the truth behind the local superstitions, and see beyond the tricks being played by their very own eyes to expose what has happened to Gage's family before the moors claim yet another victim...

It was inevitable. The series brings Kiera and Gage right back where he started- unfinished business with his maternal family living on the dark and mysterious moors. His grandfather’s plea for his help to find his missing cousin sets them on a search that delves into present and past family secrets including the family curse. I love this series so I required no hook to get me reading, but it sure didn’t hurt.

A Brush with Shadows is the sixth of the Lady Darby Mysteries set in 1830’s British Isles. Each mystery is fresh for each book, but it is a series that works best read in order because of the ongoing romance and relationships built through the stories.

Just finishing up their last case in Ireland, the Gages now go on to Dart Moor for a case that involves family. Newly wed and still tentative in some ways, Kiera and Gage do great with some forms of intimacy while struggling with others. He has been reticent about much of his past and seeing him in the brooding surroundings of his Trevalyan family urge her to force him to share his private pains and hurts though yes, Kiera’s temper and impatience gets the best of her so her poking and prodding is not always opportune even if it is necessary and cathartic for Gage. I enjoy seeing this pair’s relationship grow and deepen as much as I enjoy the mysteries.

The disappearance of his older, profligate cousin who bullied him as a child, forces Gage along with Kiera to return after a fifteen year absence to an unwelcome reception. The mystery was a bit ethereal for much of the book because the disappearance could have been for many reasons and it could mean a death or just a person gone. Alfred was not liked and it seemed everyone had a reason to see him gone and nearly everyone was acting like they could have done it.

As in the previous books set in the highlands and then border country of Scotland, Edinburgh, and then Ireland, this latest that depicts the moors was richly described so that I felt I was there. I loved the way this one set up with them in an atmospheric home with residents to match, the wild countryside, the neighbors, and even the hint of a witch and legends. It brought added tension and chills to the story so that I never wanted to put the book down.

So, all in all, this latest Lady Darby mystery was captivating and the series continues to hold strong. Historical mystery fans who enjoy a strong romance motif should definitely jump into these. I can’t wait to press on to the next book.

Morning everyone! Sophia Rose is back on the blog today with a guest review and she has an interesting one for you. A historical mystery set in England of 1919. That sound fun already. Read on to see what Sophia Rose thought of the book. 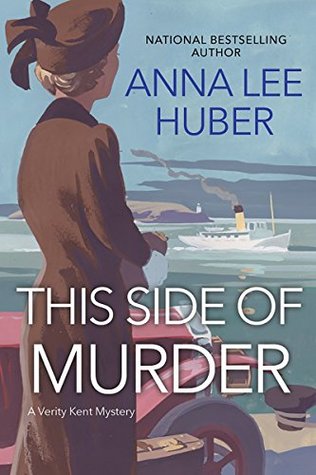 The Great War is over, but in this captivating new series from award-winning author Anna Lee Huber, one young widow discovers the real intrigue has only just begun . . .
An Unpardonable Sin?

England, 1919. Verity Kent’s grief over the loss of her husband pierces anew when she receives a cryptic letter, suggesting her beloved Sidney may have committed treason before his untimely death. Determined to dull her pain with revelry, Verity’s first impulse is to dismiss the derogatory claim. But the mystery sender knows too much—including the fact that during the war, Verity worked for the Secret Service, something not even Sidney knew.
Lured to Umbersea Island to attend the engagement party of one of Sidney’s fellow officers, Verity mingles among the men her husband once fought beside, and discovers dark secrets—along with a murder clearly meant to conceal them. Relying on little more than a coded letter, the help of a dashing stranger, and her own sharp instincts, Verity is forced down a path she never imagined—and comes face to face with the shattering possibility that her husband may not have been the man she thought he was. It’s a truth that could set her free—or draw her ever deeper into his deception . . .

I first noticed this author’s regency era mysteries and they seemed good. Then I noticed that she was starting a whole new series of historical mysteries and they were to be set post WWI with a clever former Secret Service heroine. Immediately, I chose to go with the shiny new series though after reading, This Side of Murder, I do very much need to go back for the older, Lady Darby series, too.

The book was an engaging blend of history and mystery with a whiff of romance. The heroine, Verity Kent, is a war widow who is living on the edge as a way to push back the shadows of grief. This island house party hosted by a friend of her dead husband is not one she would have attended save for the cryptic letter accusing Sidney of treason. Nothing feels right about the party from the atmosphere to the other guests to the hosts themselves and then someone dies…

I was bowled over by this author’s gift for time, setting, and atmosphere. I had no trouble believing this story was from the ’20s or that the characters had all been touched by the horror of war in their own ways. Verity was a character gem and I enjoyed exploring her world and watching her backstory and personality develop as things progressed. She wants to move on with her life after Sidney and the war, but she can’t seem to let go. And now there is Max who seems to awaken feelings in her even while he is also a suspect in the current situation and so cannot be trusted entirely.

The mystery was complex. It was a current murder mystery that was strongly connected to a secret past incident that ties all the house party guests together and makes them suspects. Just when I thought I had a grip on the answer there was this huge twist at the end that showed me I only had a partial answer.

All in all, I was thrilled with my first encounter with the author and her new lady sleuth. I will definitely be exploring further mysteries with Verity and also want to go back for the Lady Darby ones as well. Historical mystery fans should definitely give this a try.