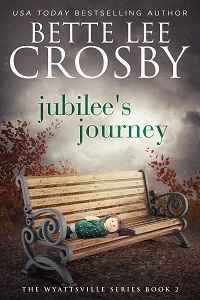 Crime is a rarity in the small town of Wyattsville, so when one occurs it is front page news. Grocery store owner, Sidney Klaussner, shot in the course of the robbery, is lying in the hospital unconscious. In the room across from him the young man assumed to be the shooter.

Although no one knows the truth of what happened inside that store, Sidney's wife is determined to see the boy punished. The lad's only hope is his sister Jubilee. She knows why he was there but is anyone going to believe a seven-year-old?

A heartwarming saga of finding forgiveness and coming together as a family. Spare Change readers are sure to welcome back Olivia Doyle and the colorful residents of the Wyattsville Arms.

This was a poignant story told in the modern historical era of the American South. The times, the setting, and the characters were all brought to life so well that I was immediately feeling nostalgic for a time before I was even born. There was a fleeting, golden afternoon quality to the words that left me with an appreciation for how life is never all sweet and sometimes things happen that are out of our control, but we must find a way to live through to the other side.

I wasn’t sure what to expect and I was a little confused by the early part of the book since it didn’t match the blurb, but I soon realized that the author was starting events well before the current time of the story. To be clear, I didn’t mind- just confused. What I mean is that the early chapters tell the story of Bartholomew and Ruth, their early lives, becoming a family, and tragedy to the present when Paul and Jubilee, their children, take the fateful journey that sets up the events for the rest of the story. Their story is juxtaposed against another man, Hurt’s early story and what put him on an angry, murderous crash course with the two children there in a Wyattsville grocery store. This choice of how to take things back to the earlier years made sense as the story progressed.

Paul and Jubilee’s story is sad, but they have each other and try to stay hopeful because they have nothing else. Paul is an amazing young man who left school and childhood behind when he was still a young child himself to take care of his sick mother, his sister, and the household while his dad work the mines. Then when both parents were gone, as a teenager and newly evicted from their home, he takes Jubilee and all they have in a backpack to seek out a way to start over. Then, tragedy strikes again and they live under a cloud of injustice as other people work to right the wrong. I was teary-eyed and cheering for this pair of kids, but particularly this amazing young man.

I thought this whole story that had a small main cast of people trying to help Jubilee who is first thought to be a lost orphan and not associated with the kid in the hospital who was thought to be part of an armed robbery was captivating. It has a small town, slow paced feel as events march on. The story is part mystery and part fiction following the case of the armed robbery and Jubilee’s mysterious past, but also delves into the lives of several key people including Olivia Doyle, her grandson Ethan Allen Doyle, and Detective Jack Mahoney from the previous book.

I will add that there are a few times that I felt it lagged a little, but not to the point of boredom. Olivia tends to be a brooder and dithers a little and Detective Gomez was driving me to violence the way he put his career ahead of actually working Paul’s case so that went on longer than it should have. Jack Mahoney was the real hero of the story doing the actual police work since Gomez wouldn’t. He was up against department jealousies, jurisdictions, biting into his own family time and work, and then even Olivia’s shenanigans because she called him in, but barely trusted him with the truth. Olivia got on my nerves how she expected so much from him and used him even calling on his weekends at home, but had her own agenda though I get that it was on Jubilee’s behalf.