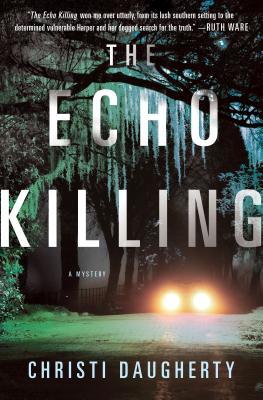 When a murder echoing a fifteen-year-old cold case rocks the Southern town of Savannah, crime reporter Harper McClain risks everything to find the identity of this calculated killer.
A city of antebellum architecture, picturesque parks, and cobblestone streets, Savannah moves at a graceful pace. But for Harper McClain, the timeless beauty and culture that distinguishes her home’s Southern heritage vanishes during the dark and dangerous nights. She wouldn’t have it any other way. Not even finding her mother brutally murdered in their home when she was twelve has made her love Savannah any less.
Her mother’s killer was never found, and that unsolved murder left Harper with an obsession that drove her to become one of the best crime reporters in the state of Georgia. She spends her nights with the police, searching for criminals. Her latest investigation takes her to the scene of a homicide where the details are hauntingly familiar: a young girl being led from the scene by a detective, a female victim naked and stabbed multiple times in the kitchen, and no traces of any evidence pointing towards a suspect.
Harper has seen all of this before in her own life. The similarities between the murder of Marie Whitney and her own mother’s death lead her to believe they’re both victims of the same killer. At last, she has the chance to find the murderer who’s eluded justice for fifteen years and make sure another little girl isn’t forever haunted by a senseless act of violence―even if it puts Harper in the killer’s cross-hairs…

At the age of twelve, Harper McClain found her mother brutally murdered in their beautiful Savannah home. Since her killer was never found, the unsolved murder of her mother left Harper obsessed and drove her to become one of the best crime reporters in the state. Now years later, another killing occurs and Marie Whitney has echoes of Harper’s mother’s murder. There are so similar, down to the finer details that Harper is sure that it is the same killer that killed her mother years ago, surfacing after all this time. But no one seems to believe her. Now Harper is left alone trying to find the killer in a world where no one seems to believe her hunch, but her actions might leave her more alienated and losing everything in order to bring forth justice.

Interesting. I liked it. For the most part, I thought the story was compelling for the most part. I think the set up had me very invested in finding out how all of this ties together in the end even if the killer becomes obvious halfway through.

I liked the writing. I thought Christi Daugherty’s writing is really good. My issue wasn’t with the story and the concept so much as it was with Harper. This is a very character driven book and if you don’t like the main character, it can definitely hinder how you feel about this book and it did with me. I liked Harper to begin with but then her obsession turned into recklessness and started testing her morality and it showed me that there are many lines that she is willing to cross despite who it hurts in the process. I found her reckless, impulsive, a user and morally questionable. I agreed with Luke and the other characters about their stance on her visit to the victim’s daughter. Even when the author played the outcome more subdue. I felt like this was a good example of how Harper really did not care the lengths she went to find this killer, or how her actions would affect multiple people in this book and her actions have caused a lot of consequences as a whole. That for me was just a little much, she wasn’t even a detective.

There was a bit of a push and pull romance going on here with Luke, the cop. She’s a crime reporter, his a cop, they shouldn’t have a relationship, they want a relationship, but they shouldn’t and Luke is also a casualty of how far she was willing to go. I love Luke, he was such a great character with a lot of heart, but I agree with his words in this book to her and don’t want to see this relationship work out.

Overall, I liked the writing, I liked the concept. It was a solid read, but ultimately I just did not care for Harper. I will probably continue on with the series because it left a hook interesting enough to see how it plays out, but I’ll be more cautious.