Hey guys, I have another lovely review for you today from our Guest Poster Sophia Rose. Sophia reviews A Taste of Ice a spicy paranormal and a second book in The Elementals series. 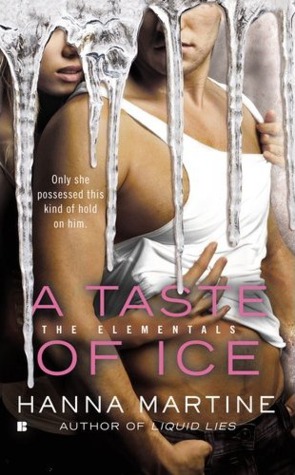 There is an untapped world of magic that any man would covet...
Five years ago, Xavier escaped from the Ofarian Plant. Today he calls a Colorado mountain town home. It’s there he buries himself in his work, swearing off magic and relationships—until a woman threatens every promise he’s made to himself.
Cat has always known she is different. Water speaks to her on an uncanny level, and she channels this gift into beautiful painted waterscapes. Now, a gallery is debuting her work in Colorado—and it’ll reveal far more about her than she imagined.
The spark between Cat and Xavier is enough to throw both of them off balance. Every tantalizing moment sends them dangerously close to a rising flood of desire. Dangerous because Xavier comes to suspect that Cat is an Ofarian—his people’s enemy. But they’re both about to discover a far greater, more malicious power at play...

This is one of those ‘why did I wait so long to pick this up and read it?’ moments. Because alien made magical and elemental humans playing up their intrigues amongst the ordinary unsuspecting folks, dark pasts and healing romance in the present is definitely my thing.

I accidentally grabbed book two, but we’re going to ignore that because I did alright. Though that said, I knew I was missing the root of this series and could sense a strong connection to the first book, Liquid Lies from A Taste of Ice.

I enjoyed this refreshing take on the paranormal romance genre as these are heavy hitting magic users who are capable and do some bad stuff and I like action plots paired with romance.

My interest was snagged from the starting line with the set-up of a nearly broken man hiding out in the human world from his past and who he really is just to survive and a bright emerging female artist who has always felt like she is missing part of herself while connecting strongly to water through her paintings.

The coming together of this pair would seem easy since they feel a strong attraction and don’t have some stupid screw-up to come between- no, Cat in particularly handles the landmines of a relationship with a guy like Xavier like a champ. It was an intriguing choice to make a sexual abuse survivor be the male and it was handled well. What ends up being the trouble is a deep and meaningful collection of issues that are valid problems that they try to work out even as crazy and bad stuff interferes. It was an interesting choice to include a third major narrator that is one of those grayish-to-black empathetic villain types.

The build of the plot both action and romance was steady and I enjoyed the anticipation for the big ending which was actually a series of big moments though some were predictable.

So, yes, I will definitely be reaching for the next installment in The Elementals series and heading back for book one. I loved the world building, action and romance plot blend and the attention to the characters. I would definitely recommend it to others who enjoy spicy paranormal romance involving X-Men style magic elementals.