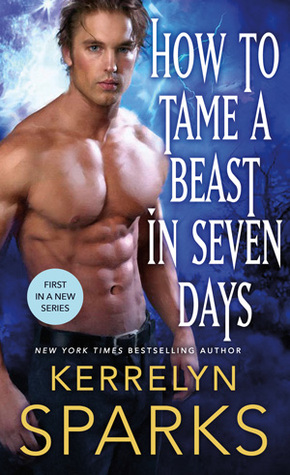 Luciana grew up on the Isle of Moon, hidden away because of her magical powers. But when her father arrives, he offers her a choice: remain on the island or return with him and marry the Beast of Benwick in order to save their legacy—and her father's life.
Lord Leofric, the Beast of Benwick, has not been touched since he was a child. Born with the power to harness lightning, he is a danger to everyone he touches. When he meets his betrothed, he expects a loveless, lonely marriage...until he discovers she's vastly more powerful than he realized. But is she strong enough to withstand his touch?
If they can survive, their love will alter the future of the kingdom. But will their extraordinary powers cost them everything?

It’s really tough to write bad reviews. Especially bad reviews on books that I end up feeling like the only black sheep.

I picked up How to Tame a Beast in Seven Days because so many of my friends loved it, and I went into the book with a lot of excitement.

There are a few things I really dislike in my books and it’s like this one hit each one with a nail on the head.

1. Insta-love – The characters fall in love almost right away. She was drawn to him by just seeing him and was already claiming love after only talking to him twice? Five days in, two conversations later and the poor girl Luciana couldn’t live without Leo. She was so terribly in love with the man of her dreams, who happened to be the man she was being forced to marry.

2. Rapid Fire Writing – what else would you call this? umm… Hectic writing? I don’t know how to explain this, but it’s when things happen so quickly and so much at a time it makes your head spin, but things also get resolved within a first few paragraphs and we move on to more really quick scenes, you know what I mean? I hate that. I feel like the author was trying to smash together too many things into one book and it kind of ended up a big giant mess. First, she didn’t have to put so many things in one book. Second, I felt like it left the book with no detail nor substance.

3. Too much drama – seriously, especially near the end. There were just one too many things happening and so quickly, it probably would have been better if one or two big things happened. I felt like I was reading a movie on rewind or cliff notes. A lot of drama was happening in the end there and it was getting resolved so super quickly that my brain was hurting.

4. Plot – Okay this wasn’t all that bad, but I had some issues. First, Luciana is being forced to marry in place of her twin dead sister because if she doesn’t – her father dies. She accepted her faith, way too easily. Next, she must pretend to be her sister Tatiana, and she ends up being really horrible about it because her sister was a complete opposite. People are suppose to believe that she is one in the same person. The two girls grew up in two different places, so even if they were identical (I am assuming?) there would probably be some differences due to their environment and not enough time had passed between the death and Luciana assuming the role that would make up for these discrepancies. Also, I did not expect the book to resolve the problem with the king as fast as it did. I expected this to be ongoing in the series.

5. World Building –  I was really, really, excited about the world at first. There are many different kingdoms and they are at war…but.. why? I wasn’t 100% sure why they kept attacking each other. Maybe I accidentally glazed over that part. There were different regents of the world, but not much is known about any of them, with the exception that the main land does not tolerate the embraced – yet multiple characters are without consequences. I felt the book would be stronger if there was more focus a bit more on world building. I get it, it’s just a paranormal romance so technically there isn’t a need for complete world building. But, since this is also a fantasy, it really would have benefited from more building.

Overall, I was really excited. I came prepared to love it and really wanted a solid paranormal (fantasy?) . Instead, I found myself rather disappointed. It didn’t help that Luciana was the most awkward virgin ever and the love scene made me cringe hard.

I think my favorite part was Brody and the dragon scene. A bit disappointed there wasn’t more of it. Instead, most of the story focused on finding assassins or assassination attacks and just, blah..

And this is just a mild annoyance, but the male lead had a head full of red hair… the cover model, doesn’t.

Now this totally could just be a me kind of thing and not the book, but for me, there was just too many things that I am not a complete fan of when it comes to books. I will probably give this author another chance as I keep hearing wonderful things about her other series.