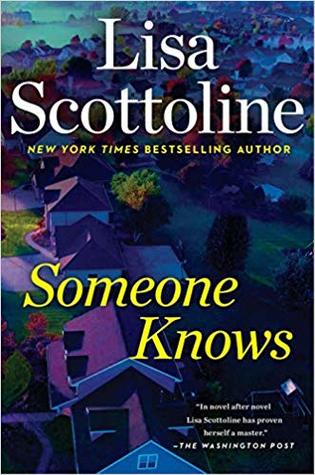 From the New York Times-bestselling author comes a pulse-pounding domestic thriller about a group of friends who have been bound for twenty years by a single secret—and will now be undone by it. Someone Knows is an emotional exploration of friendship and family, as well as a psychological exploration of guilt and memory.
Twenty years ago, in an upscale suburb of Philadelphia, four teenagers spent a summer as closest friends: drinking, sharing secrets, testing boundaries. When a new boy looked to join them, they decided to pull a prank on him, convincing him to play Russian roulette as an initiation into their group. They secretly planned to leave the gun unloaded—but what happened next would change each of them forever.
Now three of the four reunite for the first time since that horrible summer. The guilt—and the lingering question about who loaded the gun—drove them apart. But after one of the group apparently commits suicide with a gun, their old secrets come roaring back. One of them is going to figure out if the new suicide is what it seems, and if it connects to the events of that long-ago summer. Someone knows exactly what happened—but who? And how far will they go to keep their secrets buried?

Allie is headed home for the funeral of a childhood friend when she runs into two other people that share a terrible secret that they kept for twenty years.

Twenty years ago a terrible accident happened. No one was supposed to be hurt. The gun was never supposed to be loaded. But someone died, and four other people were there to witness and each carried the secret for years

This was my first foray into Lisa Scottoline’s writing, although I have collected several books from her over the years, I picked this one because it sounded exciting.

I thought this book had a lot of potentials and I liked how it was entertaining enough to keep me flipping through the pages and engaged. Ultimately, it just missed the mark.

The book is riddled with unlikable characters and the book alternates between these characters in chapters, which to me just happened to be one of its downfalls because I really did not like or care for most of these characters. I think there were only one or two characters I really liked and they just did not have enough spotlight in the story.

Even if you skip reading the blurb, it’s easy to predict who dies in the book. The book ends up being kind of split into two sections, one before the ‘accident’ and then the after.

I wish the actual twist in the book was who dies instead of the ‘twist’ that the author decides to throw at us in the end.

The last couple of chapters in the book I think is what ultimately spoiled the book for me. I thought it was just a mess. A completely freaken mess. It was clunky, a bunch of stuff thrown together for shock value that did not make sense to the overall story.

I don’t even know how to explain the stuff that just pissed me off without spoiling the book.

One of those things is the stupid direction it goes with one of the characters that just made my head hurt and honestly felt like it was added to make this book into a thriller. I think this book would have been better off focusing on how the event that occurred shaped the character’s lives.

Then this ultimate twist occurs at the end of the book and I almost threw the damn thing out the window because I was sooooo livid. IT DID NOT MAKE SENSE. I’m sorry. If it was added for shock value. Congrats. I am shocked. Shocked that it was even put in the book.

To break it down without spoiling it to the best of my ability. Knowing what we did from the book, this character’s actions did not make sense to me, especially if the character knew what was going to already happen the following day at that moment in time. Also, the behavior of the character in the epilogue after learning this horrible twist did not coincide with the character’s behavior from just witnessing the event. How it affected the character’s life, then and how it affected life after just did not make sense to me. It felt like it would have affected them worse, instead it felt like they basically said “oh well, we know now… we move on”