Morning guys! Hope you grabbed your coffee, I know I have. This morning I have Sophia Rose back with another Guest Review – Today she will be reviewing a Romantic Suspense A Nun Walks into a Bar – I think the title alone has got me giggling. Check out her wonderful review below and don’t forget to leave her some love <3 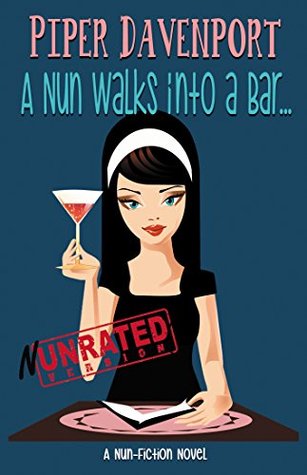 After growing up in an abbey, orphan Sadie Ross becomes Sister Abigail Eunice. Her life and career are on track until a chance meeting with a handsome stranger in a place no nun should ever go.

Ryder Carsen’s sister is missing, and he doesn’t have time for distractions. But when a pretty nun walks into his bar, he can’t ignore his attraction to her, even though she’s not the “sister” he’s looking for. He’s relieved when she walks out of his life for what he believes is forever.

Sadie’s life takes a surprising detour when she finds her path crossed with Ryder’s once again.

When they are brought back together, Ryder knows he’s found the only woman he’ll ever love, but time is running out for his sister.

Will Ryder save his sister from the men who took her?

The title… I was smiling and intrigued from the first time I spotted the title. And *snort* it’s the NUN-rated edition.

I’m already familiar with the author’s earlier Dogs of Fire MC series so I was curious about this spin-off story going on in the Dogs of Fire world. New readers can easily pick this one up without having read the older ongoing series without trouble since this pulls in new lead characters and a parallel story line.

I found this a light story with some heartwarming and thoughtful elements. The romance is the focus, but the suspense is a solid element to keep things interesting too. A woman who grew up with nuns and wanted to be a nun, but really wasn’t cut out for that vocation and a guy raised in a dark, gritty world come together. It was an intriguing situation.

Sadie was a mystery to me much of the time, I’ll admit. I had no idea why she got bent out of shape half the time’s she did or at least to the extent she did. She’s naive and vulnerable, but she’s also defensive and snarky. She needs a bit of help transitioning out into the world but sometimes she gets a chip on her shoulder and takes it wrong. She wants to be thought to have arrived before her train is barely leaving the station if that makes sense.

Ryder, now he wasn’t a mystery. He’s a steamroller once he gets going. He’s alpha to the core and has the need to be in control and keep those he cares about safe- bubble wrap probably isn’t out of the question. But, this need makes sense when his past and his sister’s issues come into play. Sadie was a good fit for him and kept him on his toes just like he had the patience and understanding not to see her as an oddball, but a person who just needs some time.

The suspense part seemed to be leading in one direction with Ryder’s missing sister, but then it became something huge and much more. Sadie finds out just how dark Ryder’s world was and has to figure out if she’ll stand with him or sit this one out.

I had a good time with this side story in the Dogs of Fire universe. I think lovers of that series as well as those who enjoy romantic suspense with a stronger dose of spicy romance should definitely snag this up.