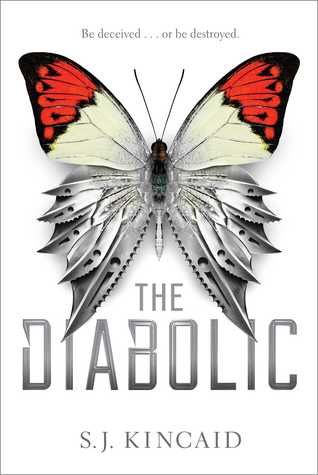 A Diabolic is ruthless. A Diabolic is powerful. A Diabolic has a single task: Kill in order to protect the person you’ve been created for.
Nemesis is a Diabolic, a humanoid teenager created to protect a galactic senator’s daughter, Sidonia. The two have grown up side by side, but are in no way sisters. Nemesis is expected to give her life for Sidonia, and she would do so gladly. She would also take as many lives as necessary to keep Sidonia safe.
When the power-mad Emperor learns Sidonia’s father is participating in a rebellion, he summons Sidonia to the Galactic court. She is to serve as a hostage. Now, there is only one way for Nemesis to protect Sidonia. She must become her. Nemesis travels to the court disguised as Sidonia—a killing machine masquerading in a world of corrupt politicians and two-faced senators’ children. It’s a nest of vipers with threats on every side, but Nemesis must keep her true abilities a secret or risk everything.
As the Empire begins to fracture and rebellion looms closer, Nemesis learns there is something more to her than just deadly force. She finds a humanity truer than what she encounters from most humans. Amidst all the danger, action, and intrigue, her humanity just might be the thing that saves her life—and the empire.

A science fiction, standalone novel that uses politics and religion to build a unique, brutal world, but ultimately falls short.

Nemesis is a diabolic, a genetically engineered humanoid that is built with one purpose in mind and that is to protect the person they are bonded to until their very last breath.

When Sidonia, a senator’s daughter is called to court as a hostage – because of her father’s meddling in trying to bring back the study of science – Nemesis finds herself impersonating the one person she would give her life to make sure she is safe. Nemesis thinks she is heading to court to her death, but ends up finding an entirely different, vicious reason for why she was called to court along with the other heir’s of the ruling families.

It’s been a while since I read a science fiction novel, let alone a young adult science fiction novel, so when I saw The Diabolic, I knew I had to read it right away. Unfortunately the book started off on a rocky ground for me and continued to crumble along. It did not help that it sounds like it is in fact a standalone and has left me with more questions than answers.

I liked the fact that the setting of the book took place in outer space, but where the setting could have really shined – it barely played a big part of the book. The story is that the emperor has suppressed the education of sciences, so the current technology used by the people is so old they don’t even know how to fix it. All these ships that carry people through space break down and cause a rip in the space itself – they call it malignant space that closely resembles a black hole and people are scared that as it expands it will eat up their existence.

But this is just a background story that sets the brutal mood of the book. Most of the story takes place on Chrysanthemum, which is where the Emperor lives and I believe it’s a ship? I found that a little unclear.

I felt like the author was trying to make some sort of political and religious statement here as both play a large part and NOT in a good way. The people are very religious and devout and the political control these people with an iron fist to the point where the emperor and his followers have no qualms when it comes to killing a lot of innocent people. There is a statement that the author makes that the moment people expand their knowledge and discover their capability there is a political revolution and they try to overthrow the current government and that is something the emperor is so afraid of that he even killed his own family members to get to where he is today.

There was a lot of killing, brutal killing and a lot of innocent people and animals alike die in the hands of more powerful. I don’t know why I didn’t like this, it didn’t settle well in my stomach and maybe it’s because it hit too close to some kind of a twisted reality that we are trying not to acknowledge, and I hope that is not the case, but that turned me off from the story.

I didn’t understand Nemesis character. Was she a machine or a human? She has no tear ducks, but many times it mentions that her eyes blurb when she doesn’t blink. She is suppose to have one mission in life and that is to be a cold heartless killer in order to protect the one person she is bonded to. Okay, but as the story goes on, Nemesis has a conscious and she can think, act, and even feel as we grow to find out. This baffles me a little, as the other Diabolics in this book don’t seem to exhibit similar traits. What made her so different?

I was also a bit confused about the issues in this book. It mentions people now knowing even how to fix the current technology, but how did they survive this long on such old ships? Things break down, period, even the ships they live on should be able to break down and they should be able to fix them – so this idiot didn’t make sense to me. If they didn’t have the basic of knowledge on how to fix their ships, then they couldn’t have survived as long as they did – even the ships they live on would have broken down. Even general maintenance need some sort of knowledge.

I felt there were a lot of holes. The romance was meh to me at best. I felt when it finally happened, it was a bit quick, but I guess these two deserved each other.

Overall, I was hoping to be more impressed and I wasn’t. The writing was good, but the pacing faltered at times. I spent have the time wondering if it was over yet or when it will be over. I felt there was a lot of holes left in the story and the ending happened kind of quickly, things just fell together for the characters a little too well.