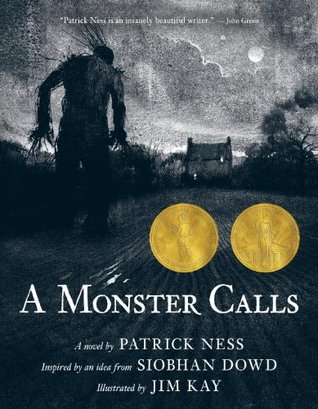 An unflinching, darkly funny, and deeply moving story of a boy, his seriously ill mother, and an unexpected monstrous visitor.
At seven minutes past midnight, thirteen-year-old Conor wakes to find a monster outside his bedroom window. But it isn't the monster Conor's been expecting-- he's been expecting the one from his nightmare, the nightmare he's had nearly every night since his mother started her treatments. The monster in his backyard is different. It's ancient. And wild. And it wants something from Conor. Something terrible and dangerous. It wants the truth. From the final idea of award-winning author Siobhan Dowd-- whose premature death from cancer prevented her from writing it herself-- Patrick Ness has spun a haunting and darkly funny novel of mischief, loss, and monsters both real and imagined.

Guys, I am going to be honest here. I picked this book up because a ton of people asked me if I read it, with the movie out, I finally stumbled upon this book in the library and decided to give it a shot.

I went into this blindly. I never read the blurb or asked people what it was about and stayed away from detailed reviews. I was told when it comes to this book, that was the best way to go about it anyway. So I am having a hard time writing the review. I am going to keep it short and sweet and basically tell you that if you had not read it yet, read it. Don’t just pick up the ebook either. Go to your local library if you have to and get the physical book because the drawing in the book really add to the experience.

The actual idea of this book came from Siobhan Dowd, but it was Patrick Ness, who brought her vision to life after she was taken too soon by cancer. Patrick Ness did a beautiful job bringing her beloved characters to life, leaving us with a book that I will think span generations. When I read the book last night, I was rocked with emotion, but it wasn’t until the day after that I got to sit down, let it sink in and truly experience its effect.

The story is about a boy named Conor and his ill mother. It is haunting, it is beautiful, atmospheric and downright emotional. If you have dealt with loss, it’s grief and pain, I strongly suggest you read this. Even if you haven’t experienced loss yet, I strongly suggest you read this. But I think it’s safe to say most of us did at one point or another and this book just captures most of what we go through so well.

I expect this book will have a different experience and effect on everyone. Which is okay. I believe that’s the whole point anyway, as we each experience the monster and its interpretation differently in the moments of weakness and hopelessness.