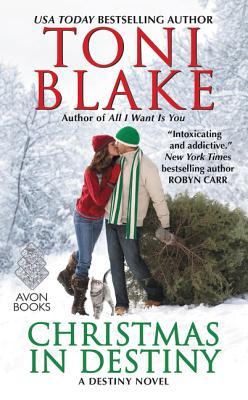 “Go to Destiny. There’s something waiting there for you.”
Shane Dalton’s new life is waiting in Miami, complete with fast cars and faster women. But first, he’s heeding his father’s dying words and stopping off in Destiny, Ohio. The detour wasn’t supposed to include a busted pickup and a blizzard. But Candice Sheridan, the cute redhead who reluctantly offers shelter, could prove a pleasant diversion. Trouble is, she thinks Shane’s bad news. And he’s pretty sure she’s right . . .
Candice had her trust broken once before. Yet something about Shane won’t let her stay away. By Christmas, he’ll be gone. Until then, she’s itching to stop playing nice and safe . . . and try being a little naughty for once.
As their holiday romance heats up, Shane uncovers a shattering secret and Candice is preparing to face heartache once again. But there’s no better place than Destiny—especially at Christmastime—for two lost souls to find the gift of sweet, surprising love . . .

Shane Dalton is ready to face his new life in Miami, with a new job, fast cars and fast women. But first, he has to make a quick detour in Destiny, Ohio because of his father’s dying last words – that something is waiting for him there.

With now much, but the clothes on his back and a couple of dollars in his pocket, Shane finds himself broken down in Destiny in a middle of a snowstorm standing on Candice Sheridan’s doorsteps.
The last thing Candice expected was for a strange man to be pounding on her door in the middle of the night, worse? He is inviting himself to stay the night because his car has been in an accident. Candice doesn’t want a strange man staying at her home where she lives alone, but the stranger saves her cat when he runs off into the snowstorm, and she allows him to stay from the kindness of her heart.

Now Shane must find what his father was talking about, even if the only clue he has is what was in his father’s last dying breath. But it’s almost Christmas time and the town and with it’s people are slowly growing on him.

This was a really lovely romantic read for the holidays. I really adored Candice with her big, kind heart for allowing herself to get close to Shane even if she knew that there was a HUGE possibility that he was going to leave like he had planned.

I also adored all the town’s festivities they had planned for Christmas. With a Christmas wedding to a small little thing for the kids, Destiny sounded like a really cozy place.

The secondary characters were really amazing as well. I loved the way Shane encouraged Grampy to pursue his love interest, no matter what age. I did enjoy the whole air of mystery around Shane, even if it wasn’t that hard to figure out and the author hints at it really early in the book. I was really curious how it all turns out.

Overall, Blake really does an amazing job spinning the magic of the holidays with a dash of romance and a couple of really unforgettable characters with tons of chemistry.