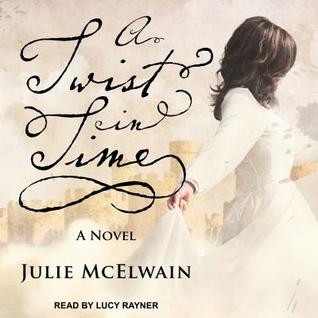 Former FBI agent Kendra Donovan's attempts to return to the twenty-first century have failed, leaving her stuck at Aldridge Castle in 1815. And her problems have just begun: in London, the Duke of Aldridge's nephew Alec-Kendra's confidante and lover-has come under suspicion for murdering his former mistress, Lady Dover, who was found viciously stabbed with a stiletto, her face carved up in a bizarre and brutal way. Lady Dover had plenty of secrets, and her past wasn't quite what she'd made it out to be. Nor is it entirely in the past-which becomes frighteningly clear when a crime lord emerges from London's seamy underbelly to threaten Alec. Joining forces with Bow Street Runner Sam Kelly, Kendra must navigate the treacherous nineteenth century while she picks through the strands of Lady Dover's life. As the noose tightens around Alec's neck, Kendra will do anything to save him, including following every twist and turn through London's glittering ballrooms, where deception is the norm-and any attempt to uncover the truth will get someone killed.

Following close on the heels of the first book, A Murder in Time’s adventures, A Twist in Time takes modern woman and tough FBI agent, Kendra Donovan to the bright lights and society of Regency London to solve a murder that hits close to home.

This is a wonderfully unique mash up of time travel and historical mystery with a dash of romance. Kendra is a 21st woman with excellent profiling skills and FBI training who inexplicably ends up in 19th century England. She’s fortunate enough to have landed in the Duke of Aldrige’s castle and that he is something of a Renaissance man who can handle her odd quirks from the start. Kendra becomes romantically entangled with his nephew the Marquis of Sutcliffe, friends with a Bow Street Runner and a lady with feminist leanings. She is torn between her sense of not belonging where women are still second class citizens and her skills make her an oddity and knowing that this is the first time she has ever been around people who like and yes, love her.

Kendra has to set all that aside when Alec, Lord Sutcliffe, gets accused of a brutal murder of his former mistress. The clues lead Kendra through the balls and soirees of London Society to the darker alleys of Cheapside. Lady Dover’s life held secrets and one of them was enough to make someone not only kill her, but mutilate her face. Kendra’s detection skills paired with the forensics and policing of that day along with her companions’ knowledge of Regency norm all come together to bring this enchanting whodunnit.

As with the first book, I was most taken with how a modern person gets along more than two hundred years in the past. It was fascinating to see her do police work when modern method and tech aren’t there to help and she is bucking an all-male system all the way.

Kendra has abandonment issues from her parents and issues because of things that happened in her own time so she struggles to accept Alec’s love and wishes that she be with him. I confess that I wanted to shake her after a while. I get it, but it really does all come down to her own fear and need to trust someone and little to do with anything in her own time waiting for her. Alec is being punished because her parents turned their backs on her. At least she is starting to realize this in this one. I’ll look forward to where this romance thread goes in future books.

Also, her ‘I am woman hear me roar’ bit of ‘I can take care of myself’ was driving me nuts. She goes racing into the London slums alone to prove to herself and others something when it’s just stupid not to take back up. Even in modern times, she would have a partner or back up. She’s also constantly ragging on the times even though some of it is her own preferences and prejudices rather than something was necessarily wrong (which yes, it gets old when she compares things to modern times and overlooks that it’s not some great Utopia in our day and age). I get it, a woman’s lot really sucked back then as did the class system, but she chooses to toss it all out rather than see that some things were actually good if not better). This is part of her modern arrogance that because she knows the future that she knows better- you’d think she would have learned after what happened in the last book. But, at the same time, I find that the struggles Kendra goes through are a wise move on the author’s part to show that adjusting to a time travel situation would never be easy. The author did her homework on the historical setting and social mores of Regency times and brings those out through Kendra’s eyes.

The narration by Lucy Rayner continues to have me on the fence. I love aspects of her work like her accepts and ability to vocalize genders and tone. But, she gets a sing-song pattern and I feel that her Kendra voice (which is the primary one) gets whiny or snippy which might be influencing some of my issues with Kendra. I don’t dislike her work, but I don’t love it, either and had to get used to it all over again when I started this book.

Still, it was another great installment in a series that I think historical murder mystery fans and time travel lovers would enjoy.