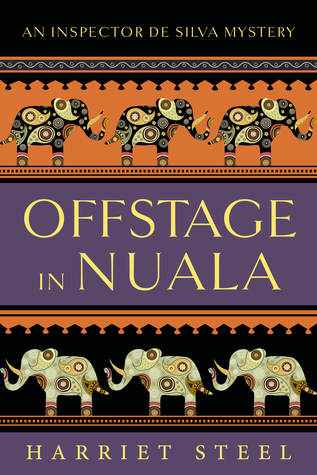 In this third instalment of The Inspector de Silva Mysteries, there’s great excitement when a professional theatre company comes to Nuala. However matters take a dark turn when the company’s actor manager is murdered. Inspector de Silva has a new case to solve and he has to consider some very unpalatable motives for the crime. He will need all his persistence, coupled with his wife, Jane’s, invaluable help to unmask the villain of the piece. Set on the exotic island of Ceylon in the 1930s, The Inspector de Silva Mysteries provide a colourful and relaxing read spiced with humour and an engaging cast of characters.

Shanti de Silva takes his wife Jane to the newly opened playhouse in Nuala when a traveling Shakespearean theater troupe arrive in town. It is not long before Hamlet is enacted in real life and Inspector de Silva must work out who brought the final curtain down on the lead actor.

This is the third of the Inspector de Silva mysteries set in 1930’s Ceylon with a Sinhalese detective who must always do a balancing act between the Colonial British government and the local peoples of whom he is one as he solves crime in Ceylon mountain city in the heart of tea plantation country. Shanti is a progressive and intellectual man who chose to marry warmhearted former governess, Jane. They share a tender and friendly loving relationship along with an interest in crime-solving, but also must deal with the nuances to their marriage that come from being an interracial couple.

Each of these historical cozy mysteries are a delight for the details of the 1930’s world of Ceylon and having the main character being non-British. This aids and hinders his work in turn.

The mysteries are not devilishly twisting, but they are not too easy to figure out, either. I enjoy seeing Shanti gather the facts here and there, consult Jane’s take, engage in other daily affairs, and then have an intense action-packed final scene when he exposes the killer.

The narrator, Matthew Lloyd Davies, does a stellar job of voicing gender, age, many international accents, and bringing out nuances in the story with a good handle on pacing and tone. I get lost in his storytelling each time I listen in to this series.

In summary, these are a wonderful escape to the past and an exotic setting with a clever murder and engaging characters. Definitely recommend to those who enjoy this genre.