Series: A Touch of Magic Mysteries 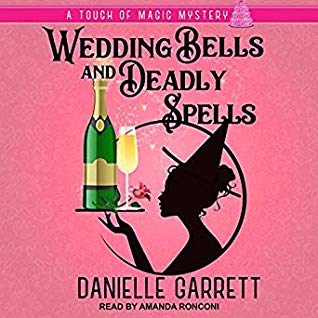 A drop of poison is all it takes to bring the biggest wedding of the season to its knees.
Anastasia Winters adheres to the adage that the show must go on, but when the groom of her latest wedding drops dead before “I do,” she’s left with no backup plan.
Things get even stickier when her friend and esteemed caterer, Francois, is named the top suspect.
Ana's loyalties are tested as the investigation turns into a vicious tug-of-war. She believes Francois is innocent, but holding the other side of the rope is the lead detective--her serious boyfriend--and the more she struggles, the more her own chance at happily ever after starts to unravel.
It’s up to Anastasia to find the killer, while gripping tightly to her relationships before they break and leave her with nothing.
***
Wedding Bells and Deadly Spells is the third novel in a new series of paranormal mysteries by Danielle Garrett. Step inside the magical world of the Seattle Haven and see what happens when the magic and wedding worlds collide! Packed full of laughs, magic, mystery, and a little romance, this series is sure to have something for everyone.

Rich, entitled, and very connected makes a jerk groom and his bride, Anastasia’s personal penance for months through planning their nuptials. She dreams of their ‘I do’ moment with happiness more than they do. I have such a good time with this author’s books that I couldn’t wait to jump back in her paranormal cozy mystery world.

Wedding Bells and Deadly Spells was the third of the Touch of Magic series that is a spinoff of the Beechwood Harbor Magic series. This series should be read in order to get the full storyline for main character and recurring characters, but it also works especially best after getting the older series because there is a small crossover with that series main character into this book.

Anastasia is a premier wedding planner for a big well-established agency. She’s at the top of her game with her career and her romantic relationship with Caleb, her Supernatural Police Agency boyfriend. But, when the snobby and annoying groom is murdered and her caterer friend stands accused by Caleb as the investigating officer even as she gets pounced on by a boss always waiting to catch her out, she is on the verge of losing everything. And, what’s with her younger sister sneaking around and lying to her? Can’t a poor witch catch a break?

I loved how this one turned out. Anastasia really got put through the wringer personally. It still had a light and fun feel, but also touched on personal relationships, career dreams, and big changes for her future while offering up a good murder mystery. She hit a low time and had to struggle which made it all the more engaging.

The mystery was good, but, I confess, that I only gave it half a thought because I was more interested in the intrigues of her personal life this go around.

Amanda Ronconi is very familiar and was a welcome sound when I picked this one up in audio edition. She has been the voice of all the author’s books and let me say, that is a good thing. She makes listening to this series and the others an enhanced experience because she captures her characters, the world, and the tone of the author’s writing so well. There is an inter-changeableness in that Ana sounds like Holly and Scarlett and Caleb sounds like the other heroine’s boyfriends, but I didn’t mind nor did it confuse me.

I think this series is getting better with each new release since this was the best yet to me. If you want entertaining cozy mystery set in a paranormal world with a well-developed cast of characters, you need look no further. 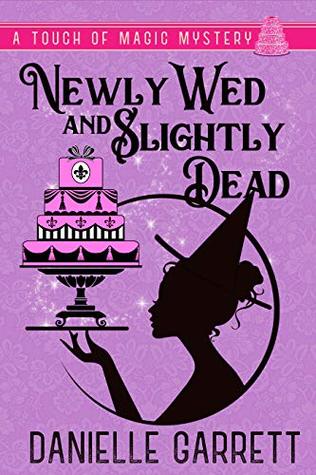 Nothing ruins a rehearsal dinner quite like a passive-aggressive toast from the unhappy mother of the groom. Things go from bad to yikes when she’s found reduced to a pile of ashes and couture and the bride is pegged as the one wielding the wooden stake.
When a vampire marries a human, things are bound to get messy…

After years spent working the birthday party and baby shower circuit, Anastasia Winters finally has a corner office and a host of supernatural clients all begging her to plan their special day. But following a brush of bad luck, she finds herself on the brink of losing it all. With an ultimatum from her boss on the table, her next wedding has to be perfect.
When the vampy mother of the groom is found dead, the bride goes on the run, and Anastasia is forced head-first into the murder investigation if she has any chance of getting the wedding back on track and keeping her job.
Unfortunately, this is one wedding crisis that requires more than a strategically placed bobby pin or double-sided sticky tape.
Can there be a fairy tale ending, or will it be Happily Ever Never?
***
Newly Wed and Slightly Dead is the first novel in a new series of paranormal mysteries by Danielle Garrett. Step inside the magical world of the Seattle Haven and see what happens when the magic and wedding worlds collide! Packed full of laughs, magic, mystery, and a little romance, this series is sure to have something for everyone.

Newly Wed and Slightly Dead picks up with Anastasia having recently made senior event planner status and working on one of the biggest wedding accounts of the year, a vampire-human wedding for the Vanguard Vampire clan. The groom’s mother has been a beast, but the rest of the wedding plans have gone without a hitch until the future monster in law gets ashed at the rehearsal dinner.

Anastasia has thrown her heart into her career and finally made it to where she wants to be, but her work is her life. She has a premiere condo, a closet full of designer shoes, a fluffy cat companion and a wayward little sister sleeping on her couch, but she doesn’t have a life. So, when the sneering witch she beat out for the job and her own boss put the pressure on, she rises to the occasion until her perfect wedding is in shambles and the bride accused of murder by the supernatural detective hottie who wants to take her out on a date.

It’s an easy quick read, but engaging and fun. Anastasia is easy to like and I enjoyed getting the intro to her world and who will likely be regular series characters. The event business is suspenseful all on its own, but it was fun seeing how the mystery turned out. I’m looking forward to continuing on with the series and can definitely recommend it to current fans of the author and those looking for a light paranormal cozy mystery.

Incidentally, at the time of writing this, the book was free on Amazon. And, if you go to the author’s website, the prequel is free.