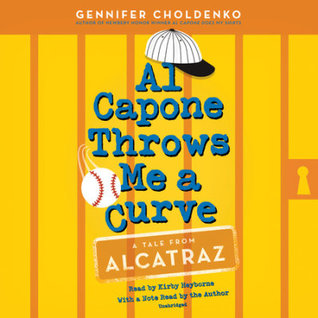 6 Hours and 4 Minutes
Newbery Honor-winning author Gennifer Choldenko returns to Al Capone's Alcatraz in this winning addition to the beloved series. Moose and his sister Natalie are growing up, and the stakes on the prison island are higher than ever.
Moose Flanagan lives on a famous island in California: Alcatraz, home to some of the most dangerous prisoners in the US in the 1930s. His dad works there. It's the summer before starting high school and Moose is going to play a lot of baseball, and win a spot on the high school team. But he still needs to watch his special older sister Natalie, and now, the warden asks Moose to look after his two-faced, danger-loving daughter, Piper. In the cell house there are rumors of a strike, and that Moose's father might step up to new job. Moose is worried: what will this mean for their family, especially for Natalie, who's had some scary run-ins with prisoners? Then the unthinkable happens: Natalie winds up someplace she should never, ever go. And Moose has to rescue her.

It was the title. I saw that title and just had to check this one out. The rest of the blurb had me even more eager to snatch up this middle grade historical fiction. A teen growing up in the mid-thirties… wait for it… on Alcatraz. Yeah, had to give this one a go.

Al Capone Throws Me a Curve is book four in the Al Capone at Alcatraz series. I had no trouble jumping in with this book though I wish I had discovered the series at the get go so I could get them in order. Definitely going back to the beginning for the other three.

I really enjoyed this story told from young thirteen or fourteen year old Moose’s perspective. He’s all boy, but has been forced to grow up fast and be responsible with an older autistic sibling and a delicate mother. He just wants to spend his summer playing baseball and being with his friends when first the Warden saddles him with keeping an eye on the Warden’s precocious daughter who’s around his age and he ends up keeping an eye on Natalie when his parents get preoccupied with a prisoner strike.

A strong element in this book is Natalie and how Moose interacts with her as a sibling. Moose is protective of his sister and struggles with embarrassment and frustration because she might have a disability, but she is also very much a young woman and not a child. He has to keep her out of trouble and it’s tough on him when he’s around his friends and has to bring Natalie along. I also loved how he took responsibility for things she did even if it meant feeling the crushing disapproval of the adults around him. He’s very conscious of how to help her with navigating her needs whether it is sticking to her routine, helping her with calm down methods, not putting her in situations where she’ll melt down, and also respecting that she is older and not stupid so her choices and happiness are important to him. He’s a good guy and works hard to help people and he strives to be a good man like his dad. I totally would have had a crush on Moose if I was a teen girl.

The historical backdrop of Alcatraz in itshey day was not skimped on. I thought the life of the families living there below the actual prison and of the inmates who had some contact with the families through those who worked service jobs was vividly sketched out and felt authentic. Moose has a dangerous situation that was not probable in some ways, but it took things to the heart of the prison and how dangerous it was inside. I thought the baseball, people with special needs, and family life in that era was also nice touches. Oh, and let’s not forget the presence of the celebrity prisoner himself. It was neat to see some interaction with Al Capone. Moose is wary and has a healthy fear of the prisoners, but can’t help being curious about some famous ones.

I experienced this book on audio and really enjoyed Kirby Heyborne’s rendition of Moose and the others. He handled Natalie’s awkward vocal parts in a respectful way just as he masterfully handled a cast that included kids to adults of both genders and had a nice way of capturing the era in his voice somehow (maybe I was imagining that). I had no trouble feeling I was right there and that a young teenager was telling the story without an annoying voice. I liked the way he handled the really tense moments so that I felt my heart race with anticipation or suspense. Definitely want to listen to more of his work.

All in all, this was a hit out of the park and I want more of Moose’s adventures and life on Alcatraz. This is a book for young teens, but I think adults who like historical fiction would enjoy this one, too.

My thanks to Penguin Random House Audio for the opportunity to listen to this book in exchange for an honest review.