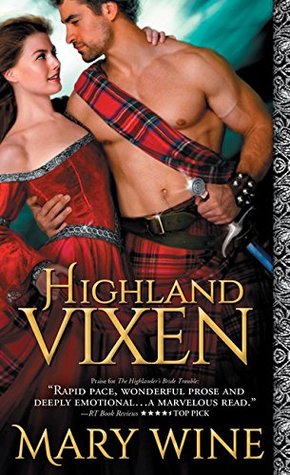 Fierce Highland war chief seeks comely lass for fun, frolic, and marriage
Marcus MacPherson is every inch the fearsome Highlander. He's used to men averting their eyes and women cowering before him. He thinks he'll eventually settle down with a nice, obedient bride. Instead, he gets Helen Grant... Stubborn as the day is long, fearless and dedicated to raising as much hell as possible, Helen is definitely going to challenge Marcus. And challenge him some more. And then some.
It's anyone's guess who'll win this battle of the heart...

I didn’t actually know what to expect from this book. I wanted something Highlander, and Mary Wine’s book jumped out at me. I have not read her before, and she is a new to me author who has pleasantly surprised me.

Highland Vixen jumped into a story leading from book one, so if you haven’t read book one, like me, I strongly suggest starting from there so you don’t have to face the same confusion.

The book opens up with Helen and Brenda Grant escaping the MacPherson Castle and looking for shelter at Court. Helen was a captive in the MacPherson castle because Marcus took her as a prize, but her life wasn’t bad by any means. The last thing Helen wants to do is sit around and wait for the Laird to marry her off.

Helen and Brenda end up at court, where they are immediately called to Earl of Morton’s attention. Morton is a regent of Scotland, and seems to think he can wield power over the Highlanders. So when Marcus shows up at Court in order to bring Helen back, he is stuck under Morton’s claws, who wants Marcus to marry a girl barely 14 to strengthen alliances. Disturbed by the prospect of sleeping with a 14 year old girl, Marcus refuses, ends up in chains and Helen comes to his rescue with the prospect of marriage to her in order to save them.

This was an interesting read. Once I was able to get used to the writing and the dialect, I found myself fully immersed in the story. It did take some time to put the pieces together, since I have not read the first book, but other reviews helped with that.

I really enjoyed the fact that it wasn’t just a romance novel, there was a lot going on, there was a full storyline with the Earl of Morton trying to cause trouble for Helen and Marcus, bringing in other clans into the fold to try and get in their way.

I was confused about why Helen and Brenda went to look for safety in Court, mainly since the two seem to be aware of Earl of Morton and just how despicable and awful the man is. It seems to me the entire situation could have been avoided. I also still am not entirely sure who Brenda is to Helen and how Helen did not come to help her friend after the escape. Especially now that they know what Morton is capable off as he tried to derail Marcus and Helen at every turn.

The romance itself was actually pretty good. I loved that there was some resistance from Helen at first considering the rocky start the two had, but I loved Marcus and his patience. He wasn’t really good at charming his new bride by any means, considering he is the War Chief of clan MacPherson and his wooing skills are zilch next to nothing. The bickering and the growing attraction were a major plus in this book amidst all the danger and excitement thrown their way.

I liked the secondary characters and their storylines and wonder how this series will progress. Well, now I am finding myself invested and hope to learn what will become of them in the future and how it will play out. Especially since the issues with the Earl of Morton have still been unresolved.