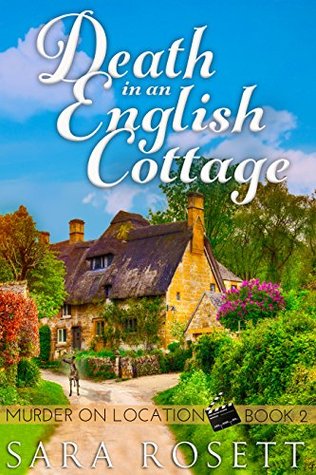 It’s spring in England, and location scout Kate Sharp has returned to the quaint village of Nether Woodsmoor with its lush gardens, budding hedgerows, and mellow stone cottages to work on a Jane Austen television documentary. The unique opportunity also gives her the chance to explore a possible romance with Alex, the deliciously rumpled local scout.
Rumors of recently discovered Jane Austen letters stir up the production, but then an unidentified young woman dies in a fire in a village cottage, and the police investigation narrows to focus on the documentary crew.
Desperate to keep her job and help a friend under suspicion, Kate delves into the search for the identity of the woman. Who was she? What was her connection to the seemingly sleepy village? And who in the village is lying?

For this second outing in the Murder on Location series, the story returns us right back to quaint English village, Nether Woodsmoor. Kate Sharp has agreed to freelance with Alex as a location scout for a Jane Austen documentary.

I had a good time with the first book because the author did a great job introducing the world of location scouting and the adorable village and its people all with a nice twisting mystery. I think I enjoyed this second book more simply because it wasn’t the introduction book and got right down to things.

Kate’s something of a Jane Austen buff and Anglophile so doing location work in the English countryside is her dream job. She’s super organized, hardworking, and independent. She likes Alex and where things left off, but she’s cautious and senses he’s keeping something from her so she’s kind of got one foot out the door back to LA just in case. As a reader, I was privy to Alex’s secret since the last book, but I could see how his secrecy is wearing on Kate especially since she’s the type who over-analyzes everything when it comes to relationships. I got impatient with him to just come clean about it.

The romance was there and advances some more, but the mysterious goings on in the village including the murder is where the main focus is at. Kate wasn’t planning to get involved until Alex becomes the number one suspect. This wasn’t really one the reader could get easily because some of the important clues don’t come until later on and there are some extra mysterious activities that muddy the waters. I had a good time following along with Kate trying to solve it.

Sarah Mallo-Christensen did a fine job once again with the narration. She does a variety of English accents and American. Pretty good with the male and female voices. She strikes just the right tone for the story.

All in all, I’m really getting into this series and looking forward to each new installment. I wasn’t sure about Kate as a heroine I’d like in the last book, but I definitely liked her in this one. The mystery was fun and light and the setting was abso-fab. I can heartily recommend it to cozy mystery fans.