Series: Servant of the Crown Mystery 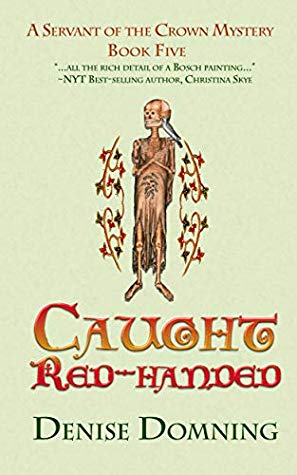 THE DEAD WALK! It’s the time of year when the immortal army of the ancient king rides Watling Street and the dead become uneasy in their graves. Indeed, in the far north of Warwickshire, the villagers insist that one dead man returned to kill his only son. Now it’s up to Sir Faucon de Ramis, the shire’s new Crowner, to run the walking corpse to ground and put him back where he belongs.

Servant of the Crown Mystery series is one I discovered earlier this year and I binged on the four currently released installments thinking I would have a long wait until next year for the fifth. However, I timed it well and Caught Red-Handed released this past fall right. Imagine my delight to see the fun spooky twist the author wove into her medieval-era murder mysteries making it perfect for the seasonal release.

Sir Faucon is settling into his royally-appointed task as Keeper of the Pleas or King’s Coronarius for Warwickshire while watching his back because the sheriff of the shire wants him dead since the truth Faucon knows after a certain murder investigation is a danger to the man. Not to mention the fact that Faucon’s new duties remove investigating murders and levying fines from the sheriff and thus depriving him of charging extra fines or bribe money to look the other way.

Sir Faucon is assisted by a sharp-tongued and bookishly clever Benedictine monk, Brother Edmund, his man at arms, Alf, and, of recent date, his own older brother in a shaky new peace between them.

They are about to stay at a Cistercian Monastery overnight on their way to perform a task in the area when a common villager and the village priest from a place to the north beg help to prevent a sacrilege. The villager, Wattard, says his step-son was killed that morning by his deceased father. A father, who has been a member of the walking dead for several years, but has become more active of late. While Faucon is digesting the news that a corpse is animated and ambling around a village, the father pleas with the abbot to protect the body of his step-son from getting chopped up for fear it will also walk.

Faucon’s hunter instincts rise and he suspects this is a task that falls into his bailiwick more than the abbot’s and goes hunting murder and shambling corpses even while Brother Edmund beguiles him with tales of the Wild Hunt who charge down Watling Street not far off and Harlequin and his wicked army of the dead.

Yep, Medieval Zombies! I chuckled with glee when Faucon had to investigate that one. I was also thrilled that the ongoing series thread about the serial killer of little girls was come to a tension-filled head in this one.

What I’ve always enjoyed about these is the attention to the historical setting, to the developing of the characters and their personal backgrounds, and to the clever mysteries. I enjoy the camaraderie Faucon shares with his group as they all work together to solve the crimes. This one was easier than most to work out, but it was still entertaining and exciting.

In the end, Faucon figures out the truth on both matters. I am left looking forward to the next installment. Those who enjoy the medieval era and love a good murder mystery should definitely pick these up.