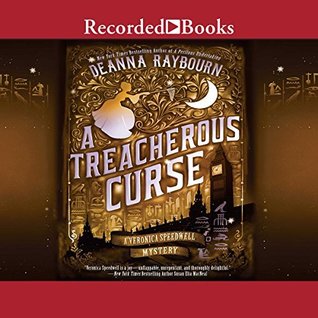 Members of an Egyptian expedition fall victim to an ancient mummy's curse in a thrilling Veronica Speedwell novel from the New York Times bestselling author of the Lady Julia Grey mysteries.
London, 1888.


As colorful and unfettered as the butterflies she collects, Victorian adventuress Veronica Speedwell can’t resist the allure of an exotic mystery—particularly one involving her enigmatic colleague, Stoker. His former expedition partner has vanished from an archaeological dig with a priceless diadem unearthed from the newly discovered tomb of an Egyptian princess. This disappearance is just the latest in a string of unfortunate events that have plagued the controversial expedition, and rumors abound that the curse of the vengeful princess has been unleashed as the shadowy figure of Anubis himself stalks the streets of London.   But the perils of an ancient curse are not the only challenges Veronica must face as sordid details and malevolent enemies emerge from Stoker’s past. Caught in a tangle of conspiracies and threats—and thrust into the public eye by an enterprising new foe—Veronica must separate facts from fantasy to unravel a web of duplicity that threatens to cost Stoker everything. . . .

After starting to make a name for themselves when it comes to landing themselves in the middle of murder investigation adventures, Veronica and Stoker are faced with something a bit more in an Egyptian curse, a missing crown of jewels and a case that brings thing too close to home for Stoker. I was thrilled to get back into the series with this sparkling intrepid pair.

A Treacherous Curse is book three in the Veronica Speedwell series. This series works best when the reader/listener gets them in order as the world and the characters develop throughout the series.

Veronica and Stoker have spent the time since their last case restoring items for their patron’s private museum and mourning the loss of an exploration trip since the earl tripped and broke his leg and the trip was cancelled. But, before things get too blasé, the pair are called in by Special Branch and handed a new case. Unfortunately, the pressure to solve it comes from the fact that Stoker might be implicated in the trouble.

I found this one fascinating on a few different levels. First of all, I love books that involve Egyptian antiquities and excavation work by an archeological team. Although, the story takes place entirely in England, the focus is the Egyptology world. Secondly, the case handed to Veronica and Stoker involves a dark part of Stoker’s past and I loved learning of that time and seeing him finally confront his past. No, I fibbed. I relished seeing Veronica confront Stoker’s past when the past reared up and tried to come over ugly. And, lastly, I am always up for more interaction between Veronica and Stoker. She’s irascible, highly intelligent, strong-willed and he’s probably the only man in the world who can match her wit for wit and step for step. But… the pair of them are not quite to the point where they understand this. So… the sparks and sizzle of understated attraction are fun.

The mystery of the missing man and missing artifact was an interesting twisty one, but not half as interesting as getting to know all the players in the piece. So much byplay and goings on among those involved. I love the way it all fits together and balances well into one coherent story.

I experienced A Treacherous Curse on audio with Angele Masters as narrator. She is a superb Veronica. It’s like she harnesses her spirit with each book in the series. What I find a weakness is her male voices. There is some distinction with some curmudgeonly like Stoker, stuffy like the baronet, or flirty like Stoker’s brother, but the trouble is that she goes with a froggy sounding deep voice. I thought she did great with all the female characters from sophisticated upper class British, teen girl, peevish woman, Brit with an Egyptian accent and caught the rhythm and emotions well.

All in all, this is one of the best historical mystery series out there and I can’t wait for each new installment. Veronica maybe a Renaissance woman as unique as her family history, but she is personable and a fabulous heroine. The Victorian era comes alive and the mysteries are satisfyingly twisting.

My thanks to Recorded Books for the opportunity to listen to this book in exchange for an honest review.