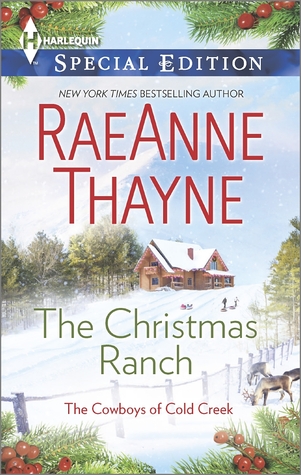 HOME FOR THE HOLIDAYS
Hope Nichols has never felt as if she belonged anywhere, except her hometown of Pine Gulch. So, when she hears that her family's property, Christmas Ranch, is set to be shut down forever, a determined Hope heads home. She refuses to let the Grinch steal her holiday—this will be the most memorable ranch Christmas ever! And, thanks to hunky former navy SEAL Rafe Santiago and his adorable nephew, she might just pull off that miracle.
Rafe is undeniably drawn to Hope and her passion for rebuilding her family home. But he knows more about Hope's tragic past than even she herself could imagine. And though she doesn't know it, she owes him her life. And all he wants in return is for her to spend it with him…

I think I might be a little obsessed. After finishing the last book in the Nichol’s sister trilogy, I came to a surprising realization that somewhere along the way, I did not read the first book. That was unacceptable, so I had to remedy that quickly. I was pleasantly surprised I already had the book on my kindle and dove right in it.

Guys, I cannot believe I somehow put off reading these books. I am totally kicking myself because I just love them so much. I fell in love with all the characters and I find that I truly am going to miss them. I am glad Thayne wrapped everything up on high note and even gave us a glimpse at what’s in store for the sisters.

The Christmas Ranch is actually the first book in this awesome, romantic and sweet series. It features Hope, the middle sister. Hope watched her father get shot at a rescue mission that went terribly wrong. Rafe Santiago was a rookie, who felt responsible for not being fast enough to save the young girl’s father. The last thing Rafe expected was to end up running into Hope Nichols, the girl he pulled away screaming into the helicopter and the guilt that came attached after. Hope doesn’t remember him, but after his nephew puts a nice hole in her car window with a rock, Hope finds a way into his life.

This was super cute. I loved Rafe in the other books and needed to know how it all began. Rafe is so much different than the other men in this series. He is an ex Navy Seal, he rescued Hope and her sisters from the people that held them hostage, and he carries a lot of guilt.

The romance was just what I expected from Thayne, it was sweet, clean, slow, and just what I needed in the past few gloomy and rainy days.  I just can’t seem to get enough of her writing.

I adored Hope and how she wanted to restore The Christmas Ranch despite the fact that her sister’s at first were so against it. The ranch was failing, there wasn’t much money made out of it and most of it was falling apart. Until Hope comes along, and tries to breath life back into the place that has been a staple in the community. With the help of Rafe and his nephew, it might just happen after all.

Rafe was amazing, and I loved watching him try to become a father figure to his nephew. He doesn’t tell Hope at first who he is and she doesn’t remember him. So it was interesting to see how it would all unfold.

I was confused by Faiths response to him when she sees him. She’s angry, but thankful to him at the same time? It was a bit confusing.

Overall, it’s a great beginning to a wonderful heart-touching, heart-melting, cozy romance series that will stay with me long after.