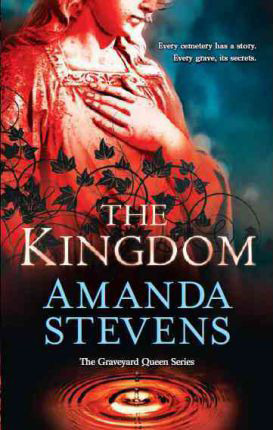 Deep in the shadowy foothills of the Blue Ridge Mountains lies a dying town.
My name is Amelia Gray. They call me The Graveyard Queen. I've been commissioned to restore an old cemetery in Asher Falls, South Carolina, but I'm coming to think I have another purpose here.
Why is there a cemetery at the bottom of Bell Lake? Why am I drawn time and again to a hidden grave I've discovered in the woods? Something is eating away at the soul of this town, this withering kingdom, and it will only be restored if I can uncover the truth.

Amelia has been commissioned to restore an old cemetery at Asher Falls, South Carolina. When she arrives things take a strange turn and she begins to wonder the real reason she was bought summoned to Asher Falls and why she feels like she is there for a greater purpose. With the way the residents of Asher Fall’s act around her has Amelia wonders that maybe she wasn’t chosen by random to restore to Asher Falls Cemetery.  The land is cursed, Amelia can feel it in her bones as if she is also a part of it. There is a great evil that lurks in the darkness of the mountain and a woman who keeps showing up always in time to save Amelia from trouble.

Wow! If I thought book one was dark and creepy, it doesn’t begin to hold a candle to The Kingdom. It was creepy, with a gothic undertone and it was tenfold more atmospherical. The book also takes on a more evil and paranormal tone over book one and makes it reading late at night that much more chilling. Don’t make that mistake, I did and found that I lost a bit of sleep because of that, hah.

I loved it. I loved everything about this book. Steven’s writing is enthralling and so good. I was so focused on the mystery, so eager to uncover the secrets of Asher Falls, the secrets of the unmarked grave that Amelia stumbled upon and why Amelia is so drawn to this place.

Thought by the end things unraveled rapidly, I was a bit surprised by the amount that was left unsaid. It might be the reason I did not give the book 5 stars and held back. I felt there was quite a bit answers left for the dead along with Asher Falls. I really hope that sometime in the future things will come to light, but I am a bit doubtful. I wanted to know more about the Asher history, their sins, why almost no one bore an heir yet and how the old cemetery ended up under the water.

I do love how the story progressed and we learned a lot about Amelia. Even if Devlin was absent in this book, his present was still strong through Amelia’s inner battle. There was a brief romance between Amelia and Thane Asher, I wanted to feel angry about it because of Devlin, but I knew there was a reason and in the end it was all going to work itself out.

I cannot wait for book 3, I feel like I should take a break and maybe read something else, but I have been so drawn to this series it is really hard to put down. Especially with the mood setting weather that we are currently experiencing.